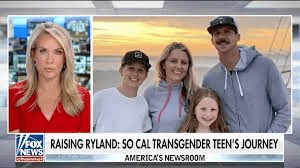 (breitbart) – Fox News promoted the story of a transgender child who switched genders at five years old as part of the network’s “LGBTQ+ Pride Month” special on Friday.

On an episode of America’s Newsroom, Fox News reporter Bryan Llenas highlighted the story of Ryland Whittington, a young girl whose family embraced her transgender transition to male when she was five years old.

Whittington hopes going public about her story will encourage other families to accept their transgender children.

“I’m just here to make the ride smoother for others. You might be struggling right now, but we believe in you,” Whittington told Fox News. “This family, we might not know you or where you live but, you know, we understand you and we believe in you.”

Llenas described Whittington as “a typical southern Californian teenager,” during the segment’s introduction. According to her mother, Hillary Whittington, Ryland told her parents that she was a boy before she could even speak.

“I could see it. It wasn’t him trying to be a brat. It was like painful. It was painful for him to have to wear feminine clothing and for us constantly telling him that you are a girl,” Hillary Whittington said.

Both of Whittington’s parents fully supported her decision when she allegedly came out as transgender at five years old.

Llenas’s coverage included statistics from the Trevor Project that indicated more than half of transgender and non-binary children engage in self-harm.

“I would rather have a living son than a dead daughter,” Hillary Whittington told Fox News. “I guarantee if we had pushed back and done what a lot of parents do, I don’t think we would have either one of the kids that you see before you here today.”

Hillary Whittington added that Ryland Whittington is living “authentically and true to himself.”

The Whittington family first hit the national spotlight after a YouTube video of the family went viral in 2014. After that, Whittington’s mother authored a book titled Raising Ryland in 2016.

At the segment’s conclusion, Llenas praised the Whittington family for being public about transgender issues in today’s political climate. He also commended the family for displaying “extraordinary courage.”

“What extraordinary courage displayed by Ryland, his sister Brynley, father Jeff, and mom Hillary. I want to thank the Whittington family for speaking to us. It’s not easy, particularly at a time when transgender issues have been politicized. People are afraid of what they do not understand, Dana [Perino],” Llenas said.

Fox News’s transgender spotlight comes as conservative states across the country have either passed laws prohibiting transgender athletes from competing in women’s sports or physicians from treating young children with “gender-reaffirming” health care.

In states like Florida, Arizona, Indiana, Kentucky, and Oklahoma, transgender athletes are only allowed to compete on a sports team that aligns with their biological sex. These laws were passed after transgender swimmer Lia Thomas dominated her female competitors in the NCAA women’s 500-yard freestyle race.

Many conservative social media users slammed Fox News for the segment after it aired on Friday.

“The latest woke org to promote changing the sex of a minor kid because the kid says he’s trans? FOX NEWS,” one user wrote, begging his followers to “turn the channel, folks.”

“I kept looking up to see if I was really watching FOX News,” one user said. “At that point we turned to Newsmax.”

“I love @FoxNews and @DanaPerino but WTAF? This poor little girl will never have children and began transitioning before she could even consent to sexual activity,” another user added. “Fox should be telling the stories of detransitioners! The ones who get shut out — the people who were transitioned too young before they could make a true decision. Trans gets enough exposure on all the other networks!”

Conservative commentator Allie Beth Stuckey noted that Fox News’s segment featured an image of Californian state Sen. Scott Weiner (D), who “just suggested requiring Drag Queen 101 for K-12, who wrote the bill preventing pedophiles from registering as sex offenders if their victim was 10 or > yrs younger & the bill lessening the penalty for knowingly exposing someone to HIV.”

“Call me old-fashioned, but I prefer when my conservative news outlets don’t encourage parents to trans their little children,” Michael Knowles tweeted.