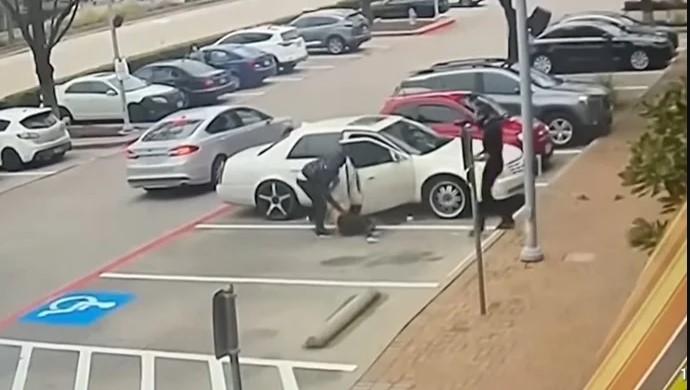 In a recent trial in Texas, a video from a shopping area surveillance camera caught a 17-year-old girl escaping from a sex trafficker who held her for over a year.

The criminal sex trafficker stomps on a young girl’s foot and then punches her in the face.  Next, he drags her by the hair into his vehicle where she escapes and passers-by begin showing up wondering what is going on.

The girl was only 16 when kidnapped and forced into prostitution.

A 17-year-old girl’s escape from a sex trafficker who had held her captive for over a year was caught on a security camera in a busy Plano, Texas city center in what’s only the latest public episode of human trafficking to make headlines in the Dallas-Fort Worth metropolitan area.

Unfortunately, the victim left the state of Texas and is no longer in contact with authorities.

The video footage was recorded in broad daylight at Plano’s bustling Shops at Legacy, a popular urban shopping and entertainment center in January of 2021, and surfaced recently in the trial of a now-convicted human trafficker, Ricky Stevenson…
…As Stevenson walked towards the driver’s side of his car, the young victim made an escape attempt, only to be thrown back into the vehicle and have the door slammed on her before jumping out of the car again and running towards a group of citizens who’d started trying to intervene.
After the girl finally freed herself, Stevenson, who had kidnapped and started sex trafficking her when she was only 16 years old, sped off. He was later caught and sentenced to 59 years in prison at trial on a number of felonies related to human trafficking, including sex crimes.

Unfortunately, the victim left the state of Texas and is no longer in contact with authorities.