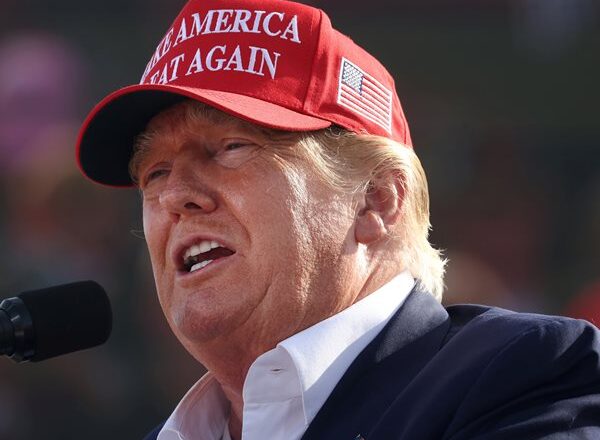 Former President Donald Trump slammed three conservative-leaning pundits on Sunday, apparently out of frustration with the post-decision coverage of this week’s landmark rulings from the Supreme Court.

In a Save America press release, Trump wrote:

“I listen to all of these foolish (stupid!) people, often living in a bygone era, like the weak and frail RINO, Peggy Noonan, who did much less for Ronald Reagan than she claims, and who actually said bad things about him and his ability to speak, or Rich Lowry, who has destroyed the once wonderful and influential National Review, the pride and joy of the legendary William F. Buckley, or George Will, whose mind is decaying with hatred and envy before our very eyes, or Jonah Goldberg and Stephen Hayes, two people who are finally out of the conversation and of no relevance whatsoever. Where do these people come from?”

Trump’s comment on Noonan might stem from a Thursday piece in The Wall Street Journal, where the prominent conservative writer suggested the Republican Party base was rejecting Trump as a future leader.

The Lowry comment could involve a different writer from The National Review saying that Trump was wrong to claim victory for Roe v. Wade being overturned by the Supreme Court, even though all three Trump-appointees — Justice Neil Gorsuch, Justice Brett Kavanaugh, and Justice Amy Coney Barrett — sided with the majority in striking down Roe v. Wade (a 5-4 decision) and upholding Dobbs v. Jackson Women’s Health Organization (a 6-3 decision).

And the George Will comment might reflect the simmering feud between Trump and Will, who often questioned Trump’s policies and conduct during his presidential tenure (2017-21).

To close out his statement, Trump added: “[Noonan, Lowry, and Will] have no idea what the MAGA movement is, and even less of an understanding of America First, which is necessary, and even vital, to save our Country. People like these are nasty, jealous, not smart, and of no use to the potential greatness of our Country. They talk, they criticize, and they complain, but they don’t have the ability or talent to get anything done. They are shortsighted ‘losers,’ and will never understand what it takes to Make America Great Again!”

“Thank you to John Nolte for truly understanding the way life works. This was not an easy thing to do, but I am very proud to have done it. Likewise, few would have had the courage to write about it. Thank you John!”