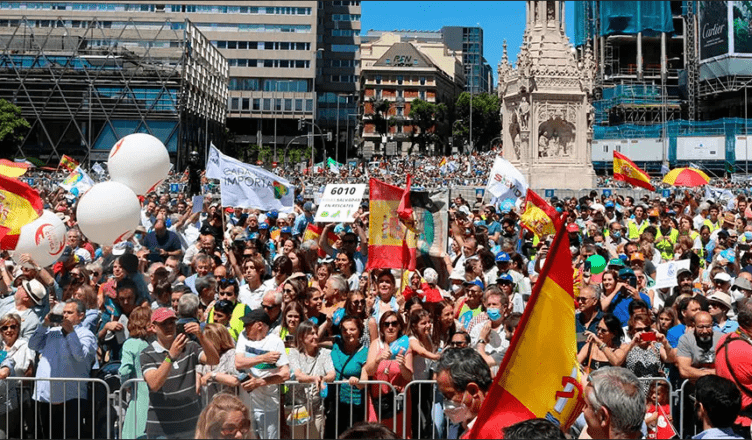 Speaking at a pro-life rally in Madrid, Spain, Jaime Mayor Oreja said the victory for life in the United States should inspire pro-lifers across the world to be “united and active” in restoring a culture of life, the Catholic News Agency reports.

“The repeal of abortion in the United States shows us that the debate on the culture of life is by no means over,” said Oreja, of the pro-life organization NEOS. “We are going to be more present, united, and active than ever.”

More than 100,000 pro-life advocates marched in downtown Madrid to protest pro-abortion legislation that would expand the killing of unborn babies in abortions in Spain, according to the report. Oreja’s organization, the Assembly of Associations for Life, Liberty and Dignity, and the Every Life Matters Platform organized the event.

“It’s essential to mobilize and defend the Christian foundations of our society in the face of relentless social disorder. We’re not here today in a debate about the past but to raise awareness and prepare for the debate of the future,” Oreja said.

Abortions are legal for basically any reason up to 14 weeks in Spain.

This summer, its Congress is considering a bill to allow girls as young as 16 to have abortions without their parents’ knowledge or consent. According to the EMEA Tribune, proposed pro-abortion legislation also could force public hospitals to abort unborn babies and restrict pro-life sidewalk counseling outside abortion facilities.

Regarding the changes to the abortion law approved by the government’s executive branch, Carmen Fernández de la Cigoña, director of the Center for University Studies’ Institute for Family Studies, lamented that the authorities “want to make us see it as moral that 16-year-old girls can go get an abortion without their families knowing about it, the people who love them the most and care about them the most.”

The reform of the abortion law was approved on May 17 by Spain’s Council of Ministers. … The bill goes next to the Congress of Deputies (lower house) for debate and a vote, and then on to the Senate.

During the march, pro-life leader Fernández de la Cigoña said government leaders are trying to twist the issue by calling killing unborn babies “good and compassionate” and criticizing pro-lifers for “caring, praying, helping those who need a helping hand,” according to the report.

Last week, pro-life advocates in the United States celebrated a huge victory for life when the U.S. Supreme Court overturned Roe v. Wade. The 1973 ruling forced states to legalize the killing of unborn babies in abortions for any reason up to viability and allowed legalized abortions up to birth. As a result, more than 63 million unborn babies and hundreds of mothers died in supposedly “safe,” legal abortions.

Now, states may protect unborn babies by banning abortions again, and ten already have done so. Most European countries have stricter abortion laws than the U.S. did under Roe.

In 2021, about 42.6 million unborn babies were aborted across the world.