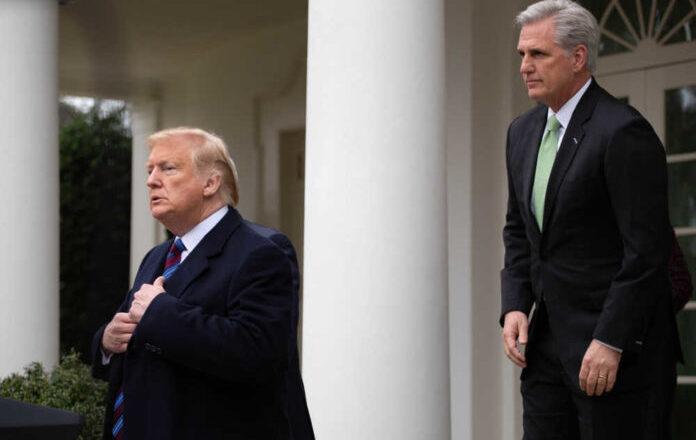 Former President Donald Trump endorsed California House Minority Leader Kevin McCarthy for re-election on June 4 for California’s 20th Congressional District, calling him an “outstanding representative for the people of California.” But he recently made it clear that his endorsement for the congressman’s re-election bid does not include his role as Speaker of the House.

In an interview with talk show host Wayne Allyn Root, Trump said that his endorsement of the minority leader did not include him being Speaker, Newsmax reported, after the host incorrectly said that Trump endorsed McCarthy as speaker.

“No, I haven’t,” Trump corrected him. “No, I endorsed him in his race. But I haven’t endorsed anybody for speaker.

McCarthy came under intense scrutiny from conservatives after a report alleged that he told GOP leadership a few days after January 6 that he would recommend that Trump should resign.

While McCarthy initially denied the report as false, leaked audio soon surfaced of him telling other Republicans that he wanted to tell Trump “I think this will pass, and it would be my recommendation you should resign.”

McCathy has said that he and Trump have since spoken about the recordings and had a “good conversation.”

Some conservatives like Root have suggested the strategy that, should Republicans take back control of the House, Trump should accept a nomination as the speaker and lead the effort to impeach the sitting president and vice president. Trump has declined to provide any fuel to that suggestion, however.

“No, and I understand that,” Trump told the host. “We have a lot of great relationships in the House…beyond great. We have some great people, and I’ll talk about that at a later date.”

Root also asked the former president whether he would run for re-election in 2024. Trump merely said, “You’re gonna be happy. You’re gonna be very happy, I really believe that.”

A recent Yahoo/YouGov poll showed that a majority of Republicans, 58%, would approve of Trump running for president, with only 25% saying no. In a head-to-head match against Biden, Trump leads Biden by three points, 42-39%.