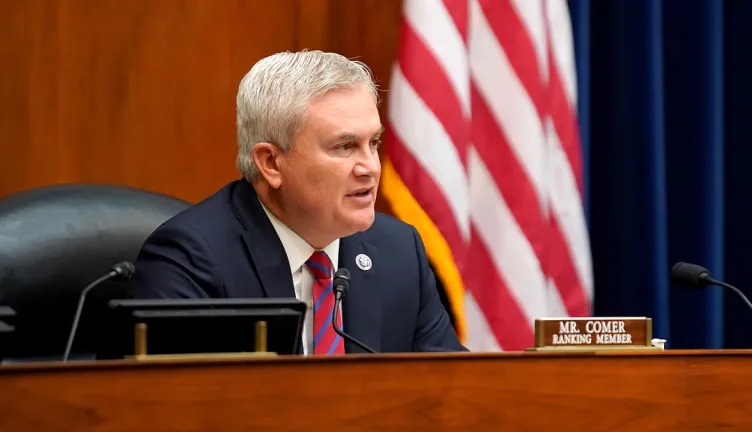 Representative James Comer (R-KY) warned that Hunter Biden is a “national security risk” in an interview with “Fox & Friends First.” Comer asked why two Russian oligarchs that had close ties to Hunter Biden, were “mysteriously” left off a recent White House sanctions list.

Comer said in the interview:

We have that computer now in the House Oversight Committee, and we’re combing through that, and I can say I share his concerns. I’ve been saying for months that Hunter Biden is a national security risk. The question now is what did Joe Biden know and when did he know it? Because Hunter Biden’s whole business model revolved around doing favors for his clients. In fact, if you look at two of the Russian oligarchs who paid Hunter Biden money, they had just been mysteriously left off this White House’s sanctions list of Russian billionaire oligarchs. We’ve asked for information from the White House as to why this omission from the two people that we know transacted money to Hunter Biden’s account, so this is a national security risk. We, as Republicans and as business owners and taxpayers, we’ve been asking for months, why did Joe Biden make some of the decisions that he makes? Maybe the reason is because Hunter Biden is compromised and therefore Joe Biden is compromised with some of these Russian oligarchs and some of these shady communist China companies.

Comer recently said that Republicans “are ready to go” in January on the Oversight and Reform Committee.

While Comer has to wait until he has the chairman’s gavel to call hearings on those topics, Republican investigations have already started

“We’re ready to go in January. I mean, we are ready to go,” Comer said in an interview last week, praising the GOP staff and investigators on the Oversight and Reform Committee.

Committee Republicans have already been pouring through a copy of Hunter Biden’s laptop hard drive. Earlier this year, Comer and Rep. Jim Jordan (R-Ohio), the ranking member on the House Judiciary Committee, released the contents of redacted portions of emails between Anthony Fauci and other top public health officials discussing the possibility of the COVID-19 virus originating in the Wuhan lab. Comer has made multiple trips to the border with Oversight Republicans.

House Minority Leader Kevin McCarthy (R-Calif.), who is aiming to become Speaker if Republicans win control of the chamber, is crafting a list of items that the House GOP wants to advance, calling it a “Commitment to America.” But even if Republicans also win control of the Senate, President Biden will remain in office, making it unlikely that conservative legislation would become law in the next Congress.

That means investigatory actions will be some of the most potent tools for a House GOP majority.

Comer wanted to make sure that his investigation into Hunter Biden “isn’t a political witch hunt.”

“We fear that several of the decisions that Joe Biden has made that were bad decisions for the American people were made because of being compromised, because of Hunter Biden’s shady business dealings,” Comer said.

“Hunter Biden is a national security risk. That’s why he’s a priority for the Oversight Committee,” Comer added.