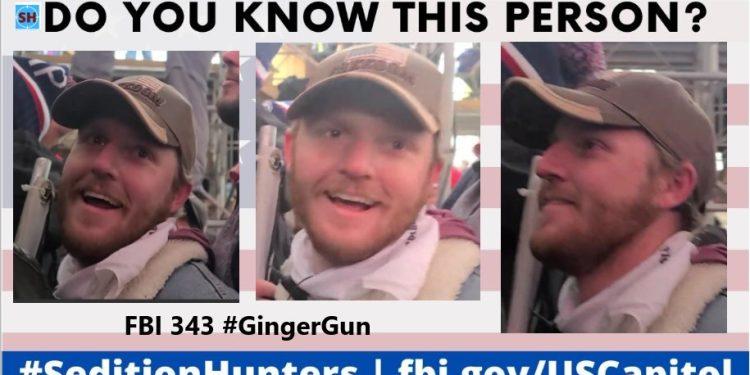 Actually, the police didn’t drop the charges on three of them. Even though they lied to the police about having a gun in their car, they were allowed to leave Washington and head back to Michigan. The three were allegedly members of antifa. A Trump supporter had a gun in his car and he was truthful to the officer about it. He has been in the gulag for over a year now without a trial date or a bail hearing.

In January The Gateway Pundit received an email from a reader only identified as George:

I’m sure you’re aware of Micajah Jackson, he’s one of Arizona’s persecuted J6 protestors. He just confronted another guy who got removed from the FBI’s most-wanted list and had a gun inside the Capitol.”

That man with a gun inside the Capitol has been identified by TGP as  Luke Phillip Robinson. Mysteriously, he was taken off the FBI Most Wanted list:

He was number 343 on the FBI list. He is one of three people who were removed from the list. Robinson, Ray Epps, and one other person were all removed. Why? Inquiring minds want to know.

And how about Rachel Powell. She is from Pennsylvania and has eight kids. She tried to break out a window of the Capitol. When that did not do the trick, she and another guy used a battering ram to break out the window to let the protesters in. Once inside, she gave the protesters detailed information hoe to gain access to other areas in the Capitol. Why was a battering ram laying around the outside of the Capitol? And where did she learn about the layout inside the Capitol?

From The Gateway Pundit

For some reason, Liz Cheney is not talking about Luke Robinson in her show trials.

Also on January 6, 2021, three Antifa domestic terrorists were stopped by police and lied about having a gun in their vehicle — These three Antifa terrorists who drove to Washington DC on January 6th to cause chaos and violence were released and allowed to drive back home to Michigan that day despite lying to police about a firearm in their vehicle.

Antifa member Leslie Grimes was released despite lying to officers about the gun in her vehicle.

Trump supporter Lonnie Coffman was arrested and detained in prison for over a year for having guns in his vehicle on January 6.