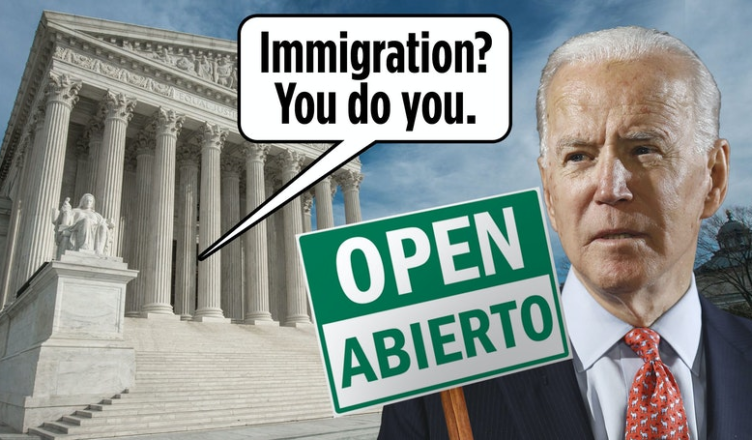 At a quick glance of the headlines, it might appear that this Supreme Court’s winning streak of good, solid, constructionist decisions ended in deeply disappointing fashion Thursday with its 5-4 ruling that the Biden administration could end Donald Trump’s highly successful “Remain in Mexico” policy.

On its surface, yeah, a win for Joe Biden. But there’s more to it.

That Trump policy, which required authorities to either place Central American asylum seekers in jail or deny them entry into the U.S. until their cases are resolved, was effective. No doubt about it. And we’d greatly prefer it to remain in place. But, as The Washington Free Beacon reports, “The justices … overturned a federal appeals court decision requiring Biden to restart Trump’s ‘remain in Mexico’ policy after the Republican-led states of Texas and Missouri sued to maintain the program. The ruling is a victory for Biden, who appealed the lower court’s decision, and his plan to implement a more ‘humane’ approach at the southern border.”

“Humane”? Naturally, Biden denies that his “humane” policies recently enticed 53 migrants to cook to death at the hands of human smugglers in an abandoned trailer that may have reached 150 degrees.

The High Court found the Biden administration had acted within its discretion by ending the program. And we either respect Rule of Law, or we don’t. So here we are, with a border even more porous than it was yesterday. How could this be, though, if we have a “conservative” Supreme Court?

We think the answer lies in something Chief Justice John Roberts said a decade ago, when he infamously saved the legislative abomination known as ObamaCare by ruling a penalty to be a tax. It was a squishy, cowardly, Beltway-driven, desperate-to-be-liked decision. But within his opinion, Roberts wrote something that rang true:

Members of this court are vested with the authority to interpret the law; we possess neither the expertise nor the prerogative to make policy judgments. Those decisions are entrusted to our nation’s elected leaders, who can be thrown out of office if the people disagree with them.

And here’s the kicker — which we can consider a cop-out or an admonition or both:

It is not our job to protect the people from the consequences of their political choices.

He’s right, to a point, but not absolutely. For example, if a Congress passes and a president signs into law a piece of legislation that is unconstitutional on the merits, as ObamaCare clearly was, it is most definitely the Supreme Court’s job to protect the people from their elected representatives. Otherwise, why would we give them those lifetime jobs and those nifty robes and that killer pension?

Complex court rulings — and this one was very complex — are often betrayed by the strange bedfellows they invite. In this case, Biden v. Texas, the five in the majority were Chief Justice Roberts, and Justices Stephen Breyer, Sonia Sotomayor, Elena Kagan, and Brett Kavanaugh. So Roberts convinced one conservative, Kavanaugh, to join him. We wonder: What convinced Kavanaugh to take a position opposite his conservative colleagues?

Justice Samuel Alito, who authored the majority opinion last week knocking down Roe v. Wade, wrote the dissent, which was joined by Justices Clarence Thomas and Neil Gorsuch. (Justice Amy Coney Barrett joined the other three in a separate dissent about procedural objections.) Said Alito: “In fiscal year 2021, the Border Patrol reported more than 1.7 million encounters with aliens along the Mexican border.”

Those are huge numbers. And, as Justice Alito wrote, the government lacks “the capacity to detain all inadmissible migrants encountered at the border.” But instead of returning them “to Mexico while they await proceedings in this country, DHS has concluded that it may forgo that option altogether and instead simply release into this country untold numbers of aliens,” many or most of whose asylum applications likely will be denied.

Texas Attorney General Ken Paxton, a Republican, was more direct: “The administration dragged its feet and refused to implement this effective program in good faith, allowing hundreds of thousands of illegals to pour over the border month after month. Today’s decision makes the border crisis worse.”

Paxton is right. But on the bright side, Biden now owns his border policy, clearly and unequivocally. This forces his hand. “Remain In Mexico” worked. If he abandons it, which he certainly will, it’ll tell us all we need to know about how unserious his “closed borders” are, and how serious he is about inviting further migrant bloodshed of the sickening sort we saw in San Antonio earlier this week.

Steven Hayward at Power Line pointed to this passage from Kavanaugh’s concurrence with Roberts:

The larger policy story behind this case is the multi-decade inability of the political branches to provide DHS with sufficient facilities to detain noncitizens who seek to enter the United States pending their immigration proceedings. But this Court has authority to address only the legal issues before us. We do not have authority to end the legislative stalemate or to resolve the underlying policy problems.

“One way of reading this,” writes Hayward, “is to say that if the American people want more vigorous immigration enforcement, they need to change presidents.”

We couldn’t have said it better.

The Court’s decision here seems reasonable, albeit disappointing. Defending our nation’s borders is an executive-branch responsibility, and this decision makes clear that the responsibility for Biden’s dereliction lies with Biden himself.

Meantime, he and Kamala Harris and Karine Jean-Pierre can lie all they want about the border being closed. The voters, though, are angry. The latest Rasmussen poll, for example, says that 73% of likely voters consider immigration to be a critical election issue.

In one sense, we should thank the Supreme Court for not bailing out Joe Biden and his fellow Democrats. Voters will remember this administration’s purposeful and impeachable malfeasance, and many other things, come November 8.