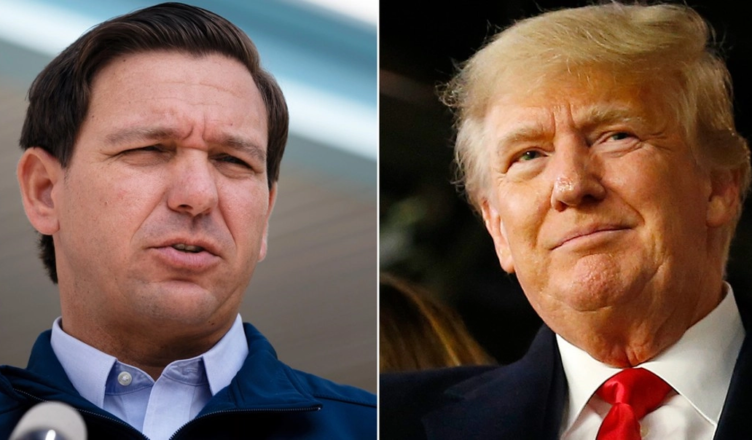 Former President Donald Trump has still not officially said whether he will run for president for the third time in 2024, but he continues to drop hints that he will.

As such, most media outlets and personalities eventually get around to the issue when they interview him, as was the case with Newsmax TV’s Rob Finnerty on Thursday.

But Finnerty didn’t just ask Trump if he planned on running, he appeared to assume that he will by then asking if he had considered rising GOP star and Florida Gov. Ron DeSantis as a running mate.

“Well, I get along with him,” Trump said before going on to take credit for DeSantis’ rise: “I was very responsible for his success because I endorsed him and he went up like a rocketship.”

In April, a survey found that Trump and DeSantis were tied in terms of several favorable areas, while he surpassed the 45th president in others.

“In the latest Rasmussen Reports survey, DeSantis and Trump are even with a 52% approval in the national poll of likely voters. And he surpasses Trump on the disapproval rating with 33% to the former president’s 45%,” the Washington Examiner reported.

“Among those with a ‘very favorable impression’ in the survey, it’s DeSantis over Trump 37%-35%, according to the analysis,” the outlet continued, adding: “But with Republicans, it’s Trump, 83% favorable, to 76% favorable for DeSantis.”

For most of the past year, DeSantis has been viewed as the 2024 GOP presidential heir-apparent if the former president decides he doesn’t want to run again. But Trump has strongly hinted on a number of occasions that he wants another crack at the White House. President Joe Biden has pledged to run again should Trump get into the race.

And the 45th president remains the most preferred GOP candidate, leading DeSantis in every 2024 survey, the Washington Examiner noted. But

“Rasmussen tested that matchup again and found Trump leading DeSantis by nearly 2-to-1. Asked who would win the nomination if both ran, 40% said Trump and 22% DeSantis. Nearly 40% said ‘neither’ or ‘not sure,’” the outlet said.

In a GOP primary though, just Republican voters matter, and in that, they picked Trump over DeSantis 59-23 percent, the survey said.

Earlier this month, Trump said that he has not asked DeSantis if the GOP governor planned to run for the presidential nomination in 2024. But he also said he believes he would win if the two squared off.

“I don’t know if Ron is running, and I don’t ask him,” Trump told The New Yorker in an interview. “It’s his prerogative. I think I would win.”

Of course, it’s not the first time Trump has fired a warning shot at DeSantis, a former congressman who has risen to prominence among Republicans in recent years as he uses his perch in the Florida governor’s mansion to pursue a laundry list of ultra-conservative policies.

Trump has repeatedly teased a 2024 presidential bid since leaving the White House last year. In his interview with The New Yorker, he said that he was “very close to making a decision” on another campaign.

Still, DeSantis’s own potential political ambitions have irked Trump, who endorsed him during his 2018 gubernatorial bid and believes that he is responsible for DeSantis’s political success.

The former president has teased DeSantis as a running mate before, even as he has pushed back on reports that there is tension between the two men.

Trump was pretty clear former Vice President Mike Pence has likely cost himself a spot on a potential Trump 2024 ticket with his declining to contest the 2020 presidential election.

“I think Mike has been very hurt by what took place with respect to Jan. 6,” Trump told O’Reilly and the crowd. “I think he’s been mortally wounded, frankly, because I see the reaction he’s getting from people.

“They say: ‘Why didn’t he just hand it back to the legislatures? Why didn’t he do it?’” Trump continued. “I think Mike would be tough.”