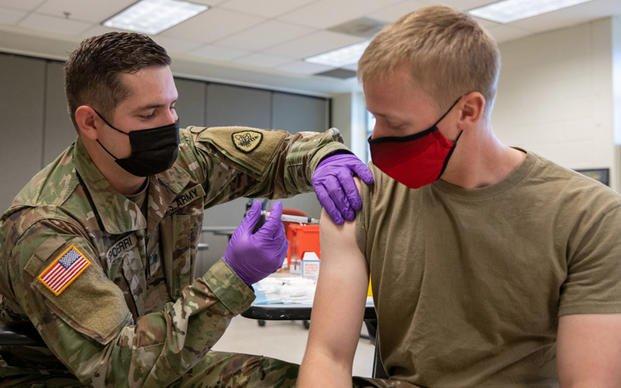 Thursday was the deadline for Army National Guard soldiers to be vaccinated against COVID-19 or potentially face separation from the service, with roughly 40,000, or 13% of its force, having yet to be inoculated, according to data from the service component reviewed by Military.com.

The numbers pose a daunting challenge to the Pentagon, which mandated vaccination against COVID-19, as it does to counter more than a dozen other ailments such as hepatitis and the flu. The Army National Guard’s deadline was the latest of any military component, with most other deadlines falling last year.

The Air National Guard, for example, had a Dec. 2, 2021, deadline and saw a vaccination rate of 94% when the deadline passed.

As of June 16, 89% of the Army Reserve was fully vaccinated, compared to 97% of the active-duty Army. So far, at least 923 active-duty troops have been removed from the force for refusing to comply with the mandate.

Neither the Army nor National Guard Bureau has developed a plan on how to handle a huge swath of its force refusing a medical mandate. Some states have a significant portion of its formations unvaccinated, and the idea of removing all of them might be unrealistic.

“It would be difficult to lose that many soldiers,” John Goheen, a spokesperson for the National Guard Association, told Military.com. “This is a challenge. For a lot of people, they just don’t see the pandemic anymore.”

It could be a tough sell to those not yet vaccinated, given that COVID-19 has had its greatest impact on people with other health ailments, including obesity and diabetes.

“We’re talking about a generally healthy portion of the population,” Goheen added, referencing Guardsmen. “I don’t know what all this is going to bring. The numbers are something that’s certainly being watched, and Guard leaders are concerned.”

While Guardsmen have a much higher vaccination rate than the general population, a state’s percentage of vaccinated troops mirroring its political makeup — with blue and purple states generally having much higher inoculation rates than red states.

For example, 20% of soldiers in the Oklahoma and 17% in the Arkansas Guard are unvaccinated, compared to only 4% and 8% of the New Hampshire and New York Army National Guard that are unvaccinated, respectively, according to data obtained by Military.com.

The idea of having to replace so many soldiers could be a non-starter for some states, especially with an ongoing recruiting crisis making filling the ranks an already uphill battle.

“We’re going to give every soldier every opportunity to get vaccinated and continue their military career,” Lt. Gen. Jon Jensen, director of the Army Guard, told Military.com in an emailed statement. “We’re not giving up on anybody until the separation paperwork is signed and completed.”

Multiple Republican governors have vowed not to kick out service members who have refused to comply with the Pentagon’s order. Oklahoma Gov. Kevin Stitt sued the Defense Department to block the mandate, saying that the vaccine “violates the personal freedoms” of troops, followed by the state’s adjutant general, Brig. Gen. Thomas Mancino, issuing a memo saying that troops would not be required to take the vaccine. Mancino later warned not complying could be a career-killer.

That showdown was a flashpoint over who has ultimate control of the National Guard, something that has never been fully articulated in laws and military regulations. Guardsmen have dueling obligations, serving their respective governors during much of their service but the federal government when tapped for deployments abroad.

However, during a Guardsman’s typical weekend duties, they are still paid by the federal government, funding that Defense Secretary Lloyd Austin has threatened to withhold. Yet it’s unclear how easily that threat can be enforced.

In the meantime, some states are telling their Guardsmen not to show up to their weekend duties if they are unvaccinated, a move short of kicking them out of the service outright.

“National Guard Soldiers are not authorized to drill after 30 June 2022 if they are not vaccinated or do not have an approved or in-process medical or religious exemption,” an Oklahoma Guard spokesperson told Military.com in an email. “Per Governor Stitt’s directive, Oklahoma does not plan to separate a Soldier based on vaccine status. Guard members will still be authorized to perform state active duty.”

— Steve Beynon can be reached at Steve.Beynon@military.com. Follow him on