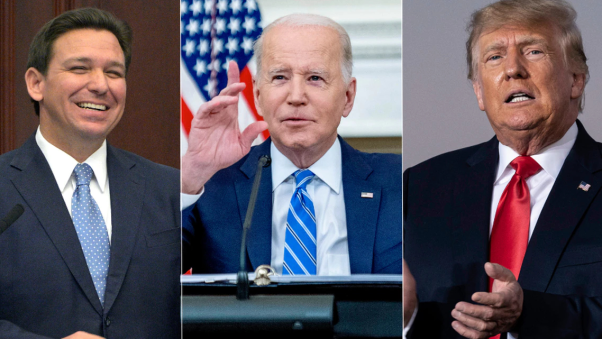 We, as American citizens, may be fortunate enough to see a second rematch in the 2024 election.

Looking at the 1888 election map, it is shocking to see New England states and California red while Texas is blue.

However, it shouldn’t be a surprise if you know your history. In those days, New York, New Jersey, Connecticut, and Indiana were the swing states. The next time you discuss with friends or family members who say we shouldn’t have the electoral college because it creates swing states, giving politicians the ability to ignore half the country. Inform them that swing states change all the time.

The rematch of 1892 will be a little over 130 years ago if Donald Trump and Joe Biden face off again in 2024. Sophie Mann, who writes for “Just the News,” wrote:

“Roughly 55% of voters surveyed said they would support a Trump 2024 ticket, while 20% say they would back Florida GOP Gov. Ron DeSantis, who is frequently floated as presidential contender.”

Later on, in Sophie’s article, she stated that 64% of Democrats think Biden should be the party’s 2024 nominee. According to an Emerson College poll from late June, Trump is in the lead against Biden. Only by 2%, but honestly, it could be higher since no one in the media or pollsters has learned anything about the silent majority.

Before you go saying this is just wishful thinking on the Republican end, the Nostradamus of our age Alex Jones made a prediction last Wednesday:

“Donald Trump is set to announce his run for 2024 on Monday, which is a very special day. We’re shooting this right now during a break during my live show on June 29th, Wednesday edition. That means in five days, on July 4th, President Trump is gonna announce he’s running for his second term. Imagine the explosive political, cultural, economic, medical, financial implications of that.”

The Monday Jones is referring to is this Monday, July 4th. Now wouldn’t that be an explosive announcement for Independence Day? Of course, it is all speculation at the moment. If it comes true, what does that mean for Midterms? Keep in mind that no one has come out to say they will run against Biden in 2024 from the Republican side. The Democrats are “mums the word” when backing Biden for reelection. If the 64% support for Joe Biden from Democrats is genuine, then it could be possible the Democrats won’t try to replace him. Why would they? That would mean admitting that Joe Biden was never in the right mind. Give credit where credit is due; once democrats make their bed, they lie in it till the day they die. They will never admit they were wrong or say the bed stinks of mold. Hence, they are so adamant about the kangaroo court called the January 6th committee. They are afraid, as cowards should be.