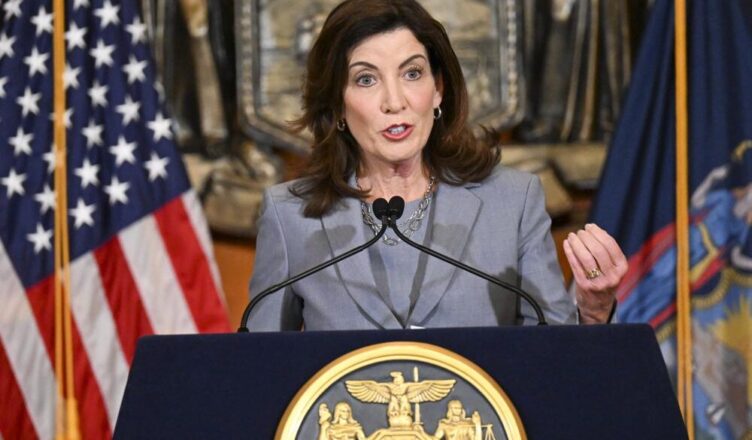 Among other things, the state’s new rules will oblige people applying for a handgun license to turn over a list of their social media accounts they’ve maintained in the past three years so officials can verify their “character and conduct.”

“Sometimes, they’re telegraphing their intent to cause harm to others,” Gov. Kathy Hochul, a Democrat, said at a news conference.

The New York State Senate Majority said in a statement; “While this ruling issued by the Supreme Court’s conservative majority invalidates the concealed carry permit restrictions, the decision allows states to issue licensing requirements for carrying a firearm. In light of this decision, the Senate Majority is taking action to address the invalidated provisions and counter the potential effects of this ruling on public safety.”

Areas where guns will not be allowed to be carried include Times Square, bars, churches, restaurants, airports, public parks, trains, subways, buses, ferries, schools, libraries, zoos, public parks, homeless shelters, and private property without permission of the property owner. The owners have to put up signs saying guns are welcome. And people who will bring guns into places without such signs might be prosecuted on felony charges.

In an interview on Fox News, New York Republican gubernatorial candidate and Congressman Lee Zeldin said that Hochul was targeting law-abiding New Yorkers with the legislation.

“They’re creating these locations as targets because now, as a criminal, if you wanted to carry out one of your acts of targeting someone with an illegal firearm, you know that you’re likely to encounter less resistance because the only people who care about these laws passed today are the law-abiding citizens,” he continued.

“It may be the start of Independence Day weekend but New Yorkers’ constitutional freedoms were just trampled on by Kathy Hochul and her pawns in the legislature. This bill is a political charade that makes New Yorkers less safe,” he said. “Only under the insanity of New York Democrats can you get out of jail free for possessing an illegal firearm, but be targeted by the government for being a law-abiding citizen exercising your constitutional rights.”