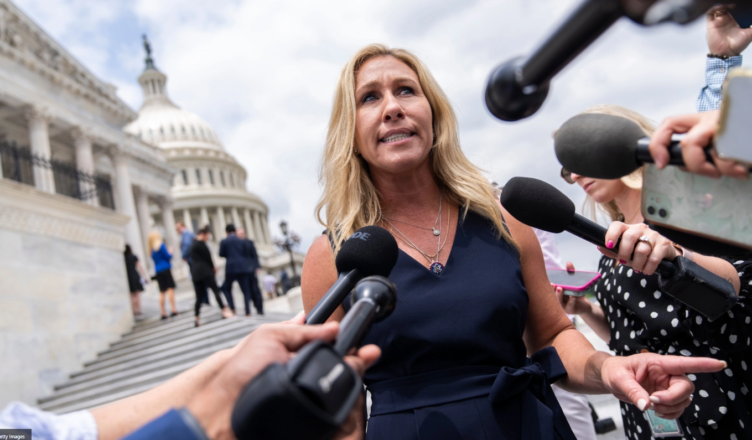 Rep. Marjorie Taylor Greene on Friday called for Congress to investigate clients of the late convicted pedophile Jeffrey Epstein and his confidante, Ghislaine Maxwell, who was sentenced to 20 years in prison last week for child sex trafficking.

In doing so, the Georgia Republican also cited the foundation launched by former President Bill Clinton and former first lady and Secretary of State Hillary Clinton.

“You know what else would be very good committee hearings? Investigating Jeffrey Epstein’s friends who enjoyed the hard work of this madam, who handed over minors to powerful men for sexual pleasure. Maxwell named the Clinton Foundation as an organization she worked with,” Greene tweeted along with a screenshot of a CNN report detailing Maxwell’s charges and sentencing.

You know what else would be very good committee hearings?

Investigating Jeffrey Epstein’s friends who enjoyed the hard work of this madam, who handed over minors to powerful men for sexual pleasure.

Maxwell named the Clinton Foundation as an organization she worked with. pic.twitter.com/EEnmKzemHL

According to a report in the Daily Mail in June, Maxwell touted her relationship with the Clintons and claimed to have helped launch the Clinton Foundation as she asked the court for a lighter sentence as proof of her “desire to do good in the world.”

Ghislaine Maxwell used her connections to Bill Clinton in an effort to get herself a lower sentence for trafficking underage girls for Jeffrey Epstein.

The disgraced socialite pointed to her work for the former President’s philanthropic endeavors three times as she argued she should serve just four years in jail at her sentencing on June 28th.

Maxwell claimed that helping launch the Clinton Global Initiative (CGI) demonstrated she has a ‘desire to do good in the world’.

“Ms. Maxwell has always worked hard. Her many educational, occupational, and avocational accomplishments include becoming an Emergency Medical Technician (EMT), a helicopter pilot, a submersible pilot, a banker; partnering with the Cleveland Clinic to establish a telemedicine platform to enable people in remote areas to obtain quality medical treatment; helping develop the Clinton Global Initiative; and supporting a variety non-profit and charitable organization,” she said in a court filing.

“She has energy, drive, commitment, a strong work ethic, and desire to do good in the world,” the document, filed by her attorneys, continued. “She has supported friends and family through tough times and personal crisis and currently is assisting women in her unit at the MDC.”

In April, U.S. District Judge Alison J. Nathan upheld Maxwell’s conviction even after juror Scotty David was found to have misrepresented himself during pre-trial jury selection.

David’s failure to disclose to the court the fact that he was sexually abused as a child was “highly unfortunate,” Nathan ruled, but it was clearly not “deliberate,” the BBC reported.

“His failure to disclose his prior sexual abuse during the jury selection process was highly unfortunate, but not deliberate. The court further concludes that juror 50 harbored no bias toward the defendant and could serve as a fair and impartial juror,” the judge said, according to the report.

David’s questionnaire answer became an issue after Maxwell’s attorneys noticed that his answer didn’t jibe with his public rhetoric.

In an early January interview with several British news outlets, David “described a moment during the deliberations when he told fellow jurors in Maxwell’s trial that, like some of the victims of the late financier Epstein, he had been sexually abused as a child,” as noted by the AP.

“I know what happened when I was sexually abused. I remember the color of the carpet, the walls. Some of it can be replayed like a video. But I can’t remember all the details, there are some things that run together,” he said in the interview, providing a description of what he told the jury.

In addition, he said that he had also “convinced other jurors that a victim’s imperfect memory of sexual abuse doesn’t mean it didn’t happen.”

Previous reports have noted that Bill Clinton flew on a plane owned by Epstein dubbed the “Lolita Express” to a private island dozens of times. He also took the plane on trips to Asia and Africa, at times accompanied by Maxwell.