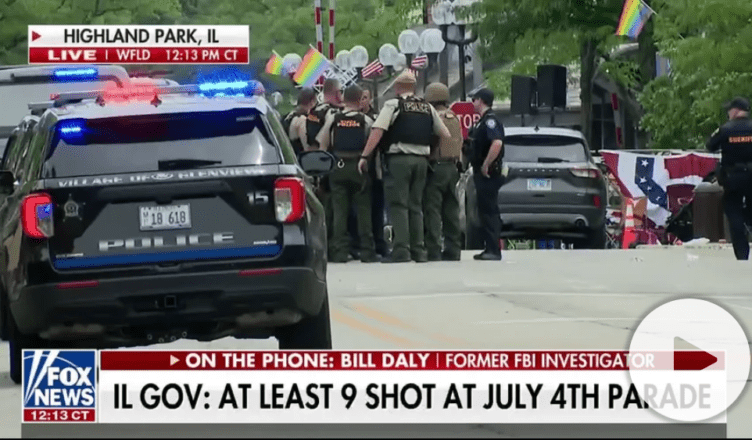 WARNING: GRAPHIC IMAGES: Illinois police are looking for a White male suspect with black hair and a slim build after a gunman attacked an Independence Day parade in Highland Park, a wealthy suburb of Chicago, according to authorities and everyone living near the scene was being told to shelter in place. Investigators believe he is around 19 years old.

He killed at least six people and wounded about two dozen more from a rooftop perch before fleeing, Lake County Sheriff’s Office Deputy Chief Chris Covelli said during an afternoon news briefing. Five of those killed were found at the scene and were adults, authorities said. Another was taken to a hospital where they died.

A child was among those hurt and was critically injured, authorities said.

Gunfire broke out at the intersection of Central Avenue and 2nd Street in Highland Park around 10:24 a.m. CT Monday, according to authorities. The gunman remained at large as of 3 p.m., and police said he had not barricaded himself anywhere or taken hostages to their knowledge.

Covelli said the suspect used “a high-powered rifle” but declined to give a detailed description of the weapon. The attack began near the last leg of the parade route, he said, and targeted spectators along the sidelines.

He added that the attack marked a “very random, very intentional and a very sad day.”

Authorities said the gunman accessed a roof of a business possibly via a ladder in an alley attached to the building.

State police and Chicago officers raced to the scene to assist Highland Park Police in the investigation, and so did deputies from the Lake County Sheriff’s Office. The FBI is also assisting, authorities said, and the Bureau of Alcohol, Tobacco, Firearms and Explosives was working on tracing the weapon used in the attack.

Officials are asking residents to avoid the area as they continue to hunt for the suspect.

“All we know right now is that he’s not in custody, and he’s not deceased,” said Mike Verden, a local resident, the founder and CEO of The Lake Forest Group security consulting firm and a former Secret Service agent, police officer, and senior director of security for the NBA. “Sometimes these guys get away… Some want to do suicide by cop, some kill themselves, and some just don’t want to get caught.”

Verden lives just four miles from the parade route and said he could hear police responding after the attack from his home. Like other area residents, he said he was sheltering in place as police conducted a large-scale search for the suspect.

“The biggest thing right now is that this person is not in custody,” he said. “Usually in these types of incidents, they die at the scene…This is kind of unique.”

He said it’s normal for authorities to assume the suspect is still armed after recovering a weapon because active shooters typically carry more than one firearm.

The Federal Aviation Administration temporarily banned aircraft from flying over Highland Park. The agency issued a five-mile “Temporary Flight Restriction” for up to 3,000 feet before canceling it at 3 p.m. local time.

Officials at Highland Park Hospital said they received 26 patients, of which 25 sustained gunshot wounds. The ages of the victims ranged from 8 to 85 years of age. Around 4 to 5 children were among those hurt.

Officials at Highland Park Hospital said they received 26 patients, of which 25 sustained gunshot wounds. The ages of the victims ranged from 8 to 85 years of age. Around 4 to 5 children were among those hurt.