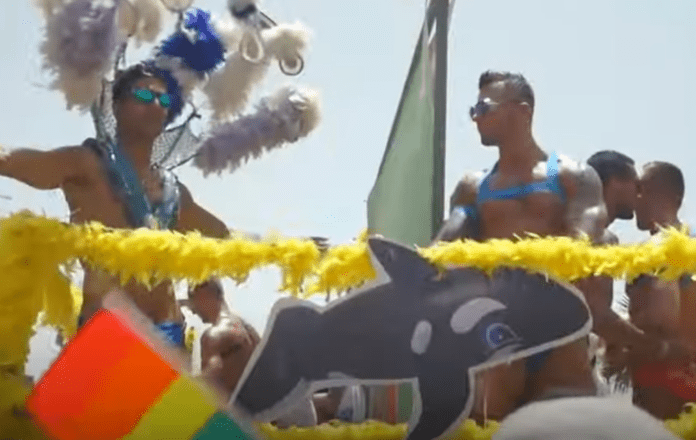 It is June, and that means one thing – America has to suffer through another Pride month.

For the entire month of June, city streets are full of rainbow flags and demented perverts who have nothing better to do than frolic around town in rainbow attire.

But things were taken to a whole new level at this one city’s Pride parade after children were forced to watch disgusting sex acts.

Pride month has gotten way out of control

In today’s world, the month of June has been overtaken by the gay community.

Like clockwork, all of the woke companies change their social media profile pictures at midnight on June 1, and every city in America is overrun with rainbow flags and pride parades.

But every year, the fanfare surrounding these pride celebrations gets more and more intense and disgusting.

Instead of celebrating being gay, these parades now include promoting bizarre fetishes such as leather, bondage, nudism, and at times pedophilia.

How these forms of perversion are allowed to disgrace America’s streets is a mystery.

But the truth is, they do not belong in public, and in many cases should not be tolerated at all.

Children are being victimized and abused at pride celebrations

Along with the trend of more intense pride celebration is a disturbing trend involving children.

Several major companies released pro-LGBT literature this past month that was designed for children.

To make matters worse, events were held across the nation such as drag story hour that put children in front of scantily clad trannie freaks.

In some cases, trannies were caught stripping in front of children, or even worse the other way around.

But just recently, the unthinkable happened at a Pride parade that had many children in attendance.

Last week, the liberal hellscape known as Seattle, Washington held their annual Gay Pride parade, and as you can imagine it was more perverted and grotesque than ever before.

More concerning, a group of Boy Scouts and Girl Scouts were tapped to lead the parade.

This is not out of the ordinary for scouts, who can be seen in almost any community parade across the nation.

But this was no ordinary parade.

You read that right, small children were exposed to naked adults biking around Seattle.