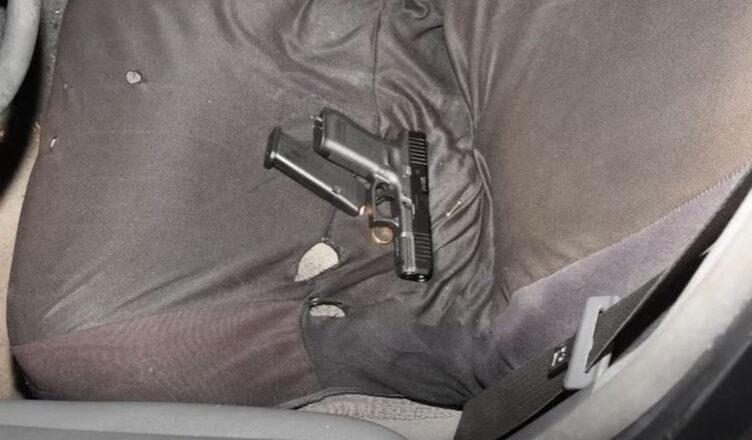 Demonstrations have been held around Akron since the June 27 police shooting of Walker, but they intensified Sunday after police made the video public, with Akron Mayor Daniel Horrigan calling it “heartbreaking.”

Video captured cops dressed in riot gear and carrying shields confronting demonstrators, who could be heard chanting, “F–k the police,” “Justice for Jayland” and “We are done dying,” reported News 5 Cleveland.

Other videos depicted police officers deploying what appeared to be a dozen cannisters of tear gas in an attempt to disperse the crowd after someone had knocked over barricades around the Akron Justice Center, according to WKYC.

During the unrest, protesters blocked traffic in the Highland Square and West Akron sections of the city, and someone had set a dumpster on fire and smashed windows of plows used to close off streets.

At a press conference that was held Sunday to announce the release of the body camera video, authorities acknowledged that Walker, 25, was unarmed when cops chased him on foot and killed him with a barrage of bullets, but they believed he had fired at them earlier from his car and feared he was about to shoot again.

It is unclear how many shots the eight officers involved in the incident fired, but Akron Police Chief Steve Mylett said the number could be more than 90, with the Walker suffering at least 60 bullet wounds — including after he was on the ground, according to an attorney for his family.

A medical examiner who arrived on the scene found Walker lying handcuffed on his back, according to an ME “worksheet” in the case, the Beacon Journal reported. He reportedly had wounds to his face, torso and upper leg.

Police attempted to pull over Walker’s car at around 12:30 p.m. last Monday for unspecified traffic and equipment violations, but he refused to stop, leading officers on a chase.

Police said Walker fired a shot from his car during the pursuit, and a transportation department camera captured what appeared to be a muzzle flash coming from the vehicle.

Mylett said that changed the nature of the case from “a routine traffic stop to now a public safety issue.”

Body camera videos show what unfolded after the roughly six-minute pursuit. Several shouting officers with guns drawn approach the slowing car on foot, as it rolls up over a curb and onto a sidewalk.

Walker wearing a ski mask exits the passenger door and runs toward a parking lot. Police chase him for about 10 seconds before officers fire from multiple directions, in a burst of shots that lasts 6 or 7 seconds.

Police said they found a handgun, loaded magazine and gold ring in Walker’s vehicle during a traffic stop.Akron Police Department/AFP via

At least one officer had tried first to use a stun gun, but that was unsuccessful, police said.

Mylett said Walker’s actions are hard to distinguish on the video in real time, but a still photo seems to show him “going down to his waist area” and another appears to show him turning toward an officer. He said a third picture “captures a forward motion of his arm.”

Police said more than 60 wounds were found on Walker’s body but further investigation is needed to determine exactly how many rounds the officers fired and how many times Walker was hit.

The footage released by police ends with the officers’ gunfire and doesn’t show what happened next. Officers provided first aid, and one can be heard saying Walker still had a pulse, but he was later pronounced dead, Mylett said.

Mylett refused to say Sunday whether the shooting was justified and added that when a cop “makes the most critical decision in his or her life” and points a weapon at someone and fires, they have to explain “for every round down the barrel of a gun.”

A handgun, a loaded magazine and an apparent wedding ring were found on the seat of the car. A casing consistent with the weapon was later found in the area where officers believed a shot had come from the vehicle.

State Attorney General Dave Yost vowed a “complete, fair and expert investigation” by the Ohio Bureau of Criminal Investigation and cautioned that “body-worn camera footage is just one view of the whole picture.”

Akron police are conducting a separate internal investigation about whether the officers violated department rules or policies.

The officers involved in the shooting are on paid administrative leave, which is standard practice in such cases.

Seven of the cops are white, and one is black, according to the department. Their length of service with Akron police ranges from one-and-a-half to six years, and none of them has a record of discipline, substantiated complaints or fatal shootings, it said.

Walker’s family is calling for accountability but also for peace, their lawyers said. One of the attorneys, Bobby DiCello, called the burst of police gunfire excessive and unreasonable, and said police handcuffed Walker before trying to provide first aid.

How it got to this with a pursuit is beyond me,” DiCello said.

He said Walker’s family doesn’t know why he fled from police. Walker was grieving the recent death of his fiancee, but his family had no indication of concern beyond that, and he wasn’t a criminal, DiCello said.

“They want to turn him into a masked monster with a gun,” DiCello said. “I ask you, as he’s running away, what is reasonable? To gun him down? No, that’s not reasonable.”

The lawyer added: “I hope we remember that as Jayland ran across that parking lot, he was unarmed.”