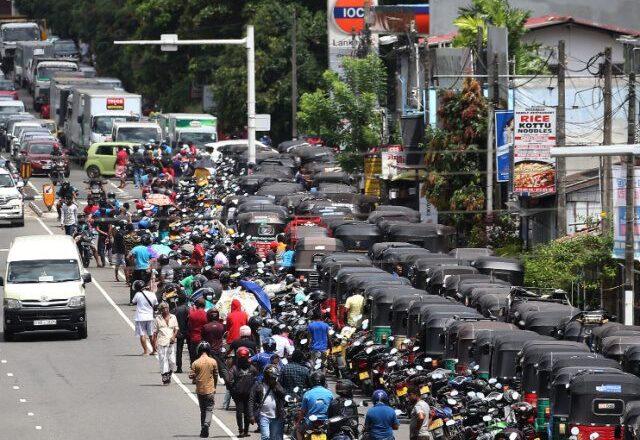 A 53-year-old man died in Sri Lanka’s western town of Aluthgama on Tuesday while waiting in line for gasoline, which has been strictly rationed in the country since March because of a dire financial crisis, Sri Lanka’s News First website reported Wednesday.

Another Sri Lankan family lost their bread-winner who was at a fuel queue. A 53-year-old father of two died after he was knocked down by a lorry in Darga Town, Aluthgama while waiting for fuel last night [June 28].

Report said that he was preparing to leave the filling station and head home when the tragedy struck. The driver of the Mathugama-bound lorry surrendered to the Police this morning.

At least 11 people have died in Sri Lanka while waiting in line for fuel since early March, the Associated Press (AP) observed on June 30.

“The latest was a 63-year-old man found dead inside his vehicle on the outskirts of Colombo. Unable to get gasoline, some have given up driving and resorted to bicycles or public transportation to get around,” the news agency reported.

The AP further revealed Thursday that Sri Lanka’s gasoline and cooking fuel lines have recently seen their wait times lengthen from several hours to as long as three days.

Citing the example of a fuel line queuer named Chamila Nilanthi, the news agency relayed, “The 47-year-old mother of two spent three days lining up to get kerosene in the Sri Lankan town of Gampaha, northeast of the capital Colombo. Two weeks earlier, she spent three days in a queue for cooking gas — but came home with none.”

“Ordinary Sri Lankans — especially the poor … wait for days for cooking gas and petrol — in lines that can extend more than 2 kilometers (1.2 miles). Sometimes, like Chamila Nilanthi, they go home with nothing,” the AP noted.

Sri Lanka’s fuel lines are just one ugly aspect of the nation’s ongoing financial crisis, which began around early March and has been described as the island’s worst such downturn since shortly after it gained independence from Britain in 1948.

Due to a confluence of poor economic management by the nation’s socialist government and unusual financial constraints tied to the Chinese coronavirus pandemic, Sri Lanka began to experience a shortage of foreign currency reserves early this year. The tropical island nation, located off India’s southern coast in the Indian Ocean, had traditionally relied upon foreign currency reserves to import most of its basic goods. Colombo’s ability to purchase essentials, such as food, fuel, and medicine, began to dwindle and translate to food shortages by March.

Sri Lanka was awaiting a possible bailout from the International Monetary Fund (IMF) as of June 30, according to the AP.