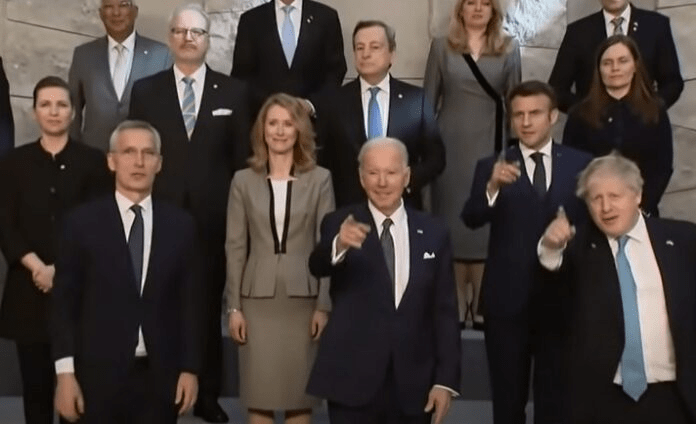 Joe Biden must’ve learned something from his former boss Barack Obama as they both have an infuriating habit of trashing America while touring overseas.

The cognitively deficient President is currently in Madrid, Spain this week for a NATO summit where he is meeting with other G-7 leaders to discuss the ongoing military crisis in Ukraine and the best plan forward to stop Putin’s eastern advancements.

During a press conference on Thursday, Biden responded to a question from a reporter who asked about America’s domestic problems. The supposed leader of the free world took that opportunity to back U.S. democracy, our founding institutions, and the will of the people in what could be the most anti-American rant ever given by a President.

A reporter asked Biden about a recent poll that claimed 85% of the country believes America is on the wrong track. His response is unmistakably shocking, something you’d expect to hear from an enemy of the United States.

“They do not think that,” Biden said about those who believe America is failing.

“You haven’t found one person, one world leader to say America is going backward.”

.@POTUS: "You haven't found one person, one world leader to say America is going backwards. America is better positioned to lead the world than we ever have been. … The one thing that has been destabilizing is the outrageous behavior of the Supreme Court of the United States." pic.twitter.com/rMmcnko9XZ

Well, maybe you can’t find one world leader who claims America is going backward because a majority of world leaders (at least the liberal globalist ones) were present at the same NATO summit, you fool.

He then launched into an implicit critique of the Senate for being unable to codify the right to abortion into federal law, urging them to break the filibuster rules protecting the minority party’s ability to block legislation.

“If the filibuster gets in the way, it’s like voting rights. We provide an exception,” the American President said.

Biden went on to rail against the U.S. Supreme Court, highlighting their decision to overturn Roe v. Wade, calling the justices “outrageous” for their ruling.

He went on to claim the high court was the only source of “destabilization” in the U.S. before saying we have “the strongest economy in the world.”

The economy is strong for whom? Globalist fat cats? Corporations? Because the economy is certainly not strong for your average, working-class American whose quality of life has taken a drastic tumble since Biden was installed in the White House.

Democrats are out of touch, and they always have been.