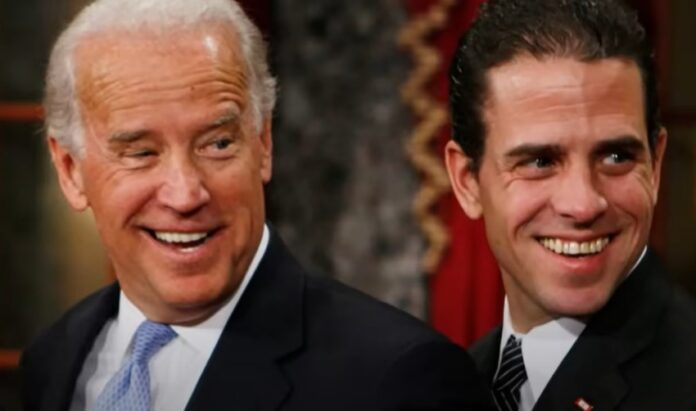 The utter depravity of the Biden Crime Family truly knows no bounds.

After exposing himself as a liar in a leaked voicemail taken from the “Laptop From Hell”, Joe Biden, fully aware of Hunter’s business dealings in China, unwittingly funded his crack head son’s habit of paying for high-class Russian hookers with money allocated for rehab and child support.

According to a report from the Washington Examiner, Hunter Biden spent over $30,000 in a three-month period from 2018-2019 on Russian escorts who worked for an “exclusive modeling agency” called UberGFE, which more than likely stands for ‘Uber Girlfriend Experience’.

Hunter, however, was broke and could not afford to pay these women their exorbitant fees, so he begged Papa Joe for assistance.

The Big Man agreed to wire his crack head son $100,000 to help cover bills associated with a drug rehab and his child’s living expenses. Hunter spent the money on drugs and hookers instead.

In one instance, Joe Biden wired his son $5,000 while Hunter Biden was actively engaged with an UberGFE escort. In another, texts indicated Hunter Biden convinced his father to wire him $20,000 to finance his stay at a New York City drug rehabilitation program that he never checked into.

Best part about the text messages between Hunter and Joe Biden is the Jan 6th committee's precedent makes it perfectly acceptable to share them on live TV.

Hunter Biden made two grave mistakes when dealing with the prostitutes from UberGFE.

First, he paid the women using a check, leaving his name and signature in writing, creating undeniable evidence of his misgiving.

NOT A MEME!
Hunter Biden paid Russian escort $9,500 with a series of three personal checks drawn on a Wells Fargo joint account he held with his wife.

Hunter Biden records himself with a Russian Escort. pic.twitter.com/6JFdWZ7rX3

You can hear the embattled Biden son convince the escort that he was a good guy.

In what could be the most surprising turn of events, Hunter Biden responded to the Washington Examiner reporter a mere minutes after it was published.

In an email to the publisher, Hunter Biden asked: “What’s wrong with you?”

A very pertinent question that Hunter should turn back on himself.

How the Biden camp will respond to these damning allegations is still not known. The White House has attempted on numerous occasions to clamp down on inquiries about Hunter’s misgivings, holding to the story that he did “nothing illegal.”