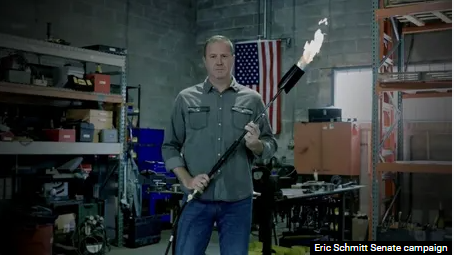 Missouri Attorney General Eric Schmitt, one of the front-runners for the Republican Senate nomination in his state’s open seat race, touts that he’s taking a “blowtorch” to what he calls President Joe Biden’s “socialist agenda” in a new provocative campaign commercial.

“I think Joe Biden is a total disaster. That’s why I’m taking my blowtorch to his socialist agenda,” Schmitt says in his new ad, which was shared first with Fox News on Tuesday.

“As your attorney general, I put a stop to Biden’s open border policies. I sued to get rid of Fauci’s COVID mandates. And I stood with President [Donald] Trump to stop election fraud,” Schmitt highlights. “In the Senate, I’ll turn the heat up on the Biden Democrats. I approve this message because now’s the time to take our country back.”

Schmitt’s campaign says it’s spending $650,000 to run the spot on TV in the Saint Louis media market, which is the largest market in Missouri.

Schmitt, who has won two statewide elections in Missouri — for treasurer and then attorney general — has made headlines over the past year and a half, filing lawsuits against the Biden administration. He is one of over 20 Republicans vying for their party’s Senate nomination in the state’s Aug. 2 primary, in the race to succeed retiring GOP Sen. Roy Blunt.

Schmitt is one of the front-runners in the primary field, along with former Gov. Eric Greitens, who left office in 2018 amid multiple controversies, and Rep. Vicky Hartzler in Missouri’s 4th Congressional District, in the predominantly rural west-central part of the state. Also in the GOP race are Rep. Billy Long in the state’s 7th Congressional District in southwest Missouri, and Mark McCloskey, the St. Louis attorney who along with his wife grabbed national headlines during the summer of 2020 for holding guns outside their home to warn off Black Lives Matter protesters.

The release of the Schmitt ad comes a couple of weeks after Greitens sparked plenty of controversy and was heavily criticized by both Democrats and Republicans for a campaign video released by his team. In the ad, Greitens touts his U.S. Navy SEAL service in the video, as he is seen breaking into a house — while holding a shotgun and flanked by a tactical team — and going on what he called “RINO hunting,” encouraging the “bagging and tagging” of moderate Republicans with a “RINO hunting permit.”

The video’s release came amid a heightened national focus on political violence, following recent fatal mass shootings and threats to government officials. The controversy was the latest to surround Greitens, who have been trying to move past graphic allegations of domestic abuse and violence made by his ex-wife in an affidavit filed in March in their child custody case.

However, the Greitens video may have appealed to some Republican primary voters, and the Schmitt ad seems to be playing to that same audience, without the controversy.

Missouri was once a competitive state but has trended Republican in recent decades.