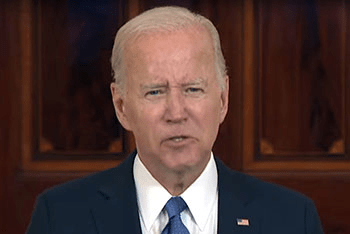 When it was first leaked that the Supreme Court was going to overturn Roe (back in May) Democrats claimed this was a major win for their side. They assumed that Americans would be outraged that Trump-selected justices overturned Roe—and would rally to elect pro-choice Democrats.

That didn’t pan out to be even remotely factual. Democrats are struggling to connect with voters. Promises to push abortion are not a winning platform. Friday, the Supreme Court made good on the rumors and overturned Roe v. Wade. And in the days to follow, Biden faired just as badly as before.

Only 32 percent of voters on Sunday approved of President Joe Biden’s job performance, matching an all-time low, according to Civiqs’ rolling average…

Biden’s job approval among black voters is only 58 percent, down from 85 percent at the beginning of his presidency…

The polling comes as national crises have impacted the American people, and specifically the black and Hispanic communities. The southern border invasion has impacted wages for low-wage, inner-city workers. Inflation has spiked to a 40-year-high, impacting those living paycheck to paycheck. American energy prices have also increased the price of utilities within the home. [Source: Breitbart]

If Democrats thought the Roe decision would bolster the Democratic troops, they were sorely mistaken. Biden offered a limp-wristed response after the court overturned federalized abortion. And voters continue to have little confidence in a man who appears more of a puppet than a president.

Democrats can talk big all they want. But promises to push abortion policy, be it at the state or Congress levels, are meaningless in light of what they’ve done.

Since Democrats took over in January 2021, America has been on a sharp, steady decline. Biden and his party’s decisions triggered out-of-control inflation. His open border is hitting minorities where it hurts the most: the job market. High gas prices are taking a huge chunk out of Americans’ already slim paychecks.

And Democrats waste our time by pushing drag queens onto our students and whining about pronouns.

Insanity. Biden’s approval has been terrible since early last year. And it has only gotten worse. The man and his corrupt administration have refused to offer any remedy to this failure. Instead, they follow the same doomed script, unconcerned at how their decisions are hurting Americans.

It’s almost laughable to watch a party that has been around for centuries become unable to address even minor concerns. Democrats cannot fix rising gas prices, slow inflation, secure the border, or even stop a bully like Putin.

And American voters are going to have their say, come November.