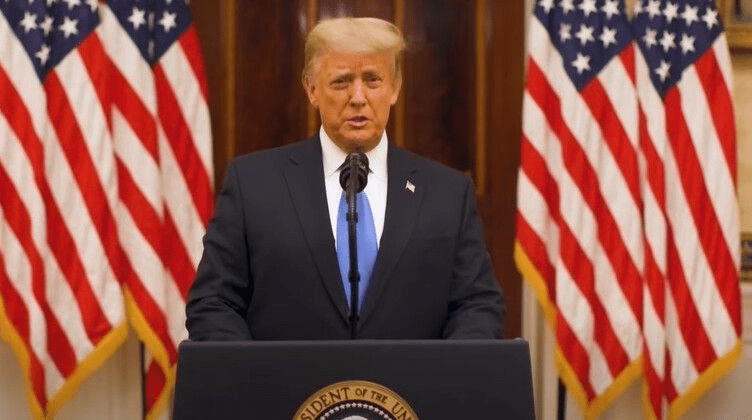 Asked in an interview with Newsmax’s Rob Finnerty on Thursday about the possibility of a Trump-DeSantis ticket in 2024, Trump noted that he has a good relationship with the Florida governor before taking credit for his political success.

“Well, I get along with him,” Trump said. “I was very responsible for his success, because I endorsed him and he went up like a rocket ship.”

Trump has hinted for more than a year and a half that he could mount another presidential campaign after losing reelection to President Biden in 2020. But DeSantis has also emerged as a possible contender for the GOP nomination as his national profile among Republicans has swelled in recent years.

While DeSantis has played off speculation about a 2024 presidential bid as a false narrative, he’s also declined on multiple occasions to rule out a run, even if Trump ultimately decides to launch a comeback campaign.

Behind closed doors, Trump has complained about DeSantis’s rumored political ambitions. Still, both men have insisted they have a good relationship, and the two were seen talking at a wedding in April at Mar-a-Lago in Palm Beach, Fla.DHS secretary: Roe reversal ‘heightened the threat environment’Kinzinger says more witnesses have come forward after Hutchinson testimony

But as DeSantis’s clout within the GOP has grown, Trump has more aggressively claimed responsibility for the Florida governor’s success. He endorsed DeSantis’s 2018 bid for governor when he was seen as a longshot primary challenger to a better-known Republican, former state Agriculture Commissioner Adam Putnam.

After Trump’s endorsement, DeSantis’s support ballooned and he went on to win the GOP nomination and, eventually, the governor’s mansion.

But that was also four years ago, and since then DeSantis has become a superstar among Republicans in his own right, gaining traction for his laissez-faire approach to the COVID-19 pandemic and frequent fights with the media and national Democrats.