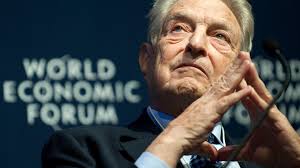 US-Hungarian Billionaire George Soros declared war on the US Supreme Court and the Republican Party in an Op-Ed on his propaganda site Project Syndicate, on July 4th, of all days.

“The American public has been alarmed and aroused by the US Supreme Court’s growing extremism“, Soros claimed. “But voters need to recognize the Court’s radical majority for what it is: part of a carefully laid plan to turn the US into a repressive regime.“

Ever since the fall of the Iron Curtain in 1989, George Soros has leveraged $32 billion in “donations” for his influence-peddling system called “Open Society Foundations” to manipulate governments and market prices in the ultimate insider trading deal. Working with the EU and USAID, Open Society wages war on conservative governments around the world with so-called Color Revolutions, and bears key responsibility for the current war in Ukraine.

Nevertheless, Soros has the chuzpah to claim that “democracy is now gravely endangered” by anyone who dares oppose him. While Soros correctly warns of the danger of autocratic regimes in Russia and China, his treasonous screed claims “the threat to the US from the domestic enemies of democracy is even greater.”

For the Hungarian-born naturalized citizen, these “domestic enemies” include the current Supreme Court, “which is dominated by far-right extremists, and Donald Trump’s Republican Party, which placed those extremists on the Court.”

Soros sees the danger from this “radicalized” Supreme Court in its strict Originalist approach to the Law: “Justice Samuel Alito, the author of the majority opinion, based his ruling on the assertion that the Fourteenth Amendment protects only those rights that were generally recognized in 1868, when the amendment was ratified. But this argument endangers many other rights that have been recognized since then, among them the right to contraception, same-sex marriage, and LGBTQ rights.”

Soros seems to acknowledge that many of the “Rights” claimed by activist courts, such as the “right to contraception, same-sex marriage, and LGBTQ rights”, are not actually to be found in the Constitution and would need to be passed by the legislature, not by activist judges.

“There is only one way to rein in the Supreme Court: throw the Republican Party out of office in a landslide”, Soros writes, while acknowledging it will not be easy:

“But when it comes to organizing a landslide victory against the radicalized Republicans, opponents face almost insuperable obstacles. Republicans have not only stacked the Supreme Court and many lower courts with extremist judges. In states such as Florida, Georgia, and Texas, they have enacted a raft of laws that make voting very difficult.

While these laws focus on disenfranchising African-Americans, other minorities, and young voters generally, their ultimate goal is to help Republicans win elections. As a Florida federal judge recently wrote in striking down one of these laws, they were enacted “with the intent to restructure Florida’s election system in ways that favor the Republican Party over the Democratic Party.”

These laws would be bad enough if they only targeted who can vote. But Republicans are now going even further, by attacking the vote-counting and election-certification process. From changing the law to make subversion of the electoral system easier, to recruiting believers in Trump’s big lie that the 2020 election was stolen from him to oversee the process, we are watching Republicans attack our system of democracy from every angle. And here, too, the radical Supreme Court has done its part, gutting the federal Voting Rights Act and allowing naked partisan redistricting to weaken minority voting power.”

“We must do everything we can to prevent” the Republicans from gaining power in November 2022, Soros writes, seemingly opening the floodgates for another round of no-holds-barred Democrat cheating.

Fortunately, American patriots now know what is at stake, after the historic fraud of 2020, and are organizing in projects like the Precinct Strategy.