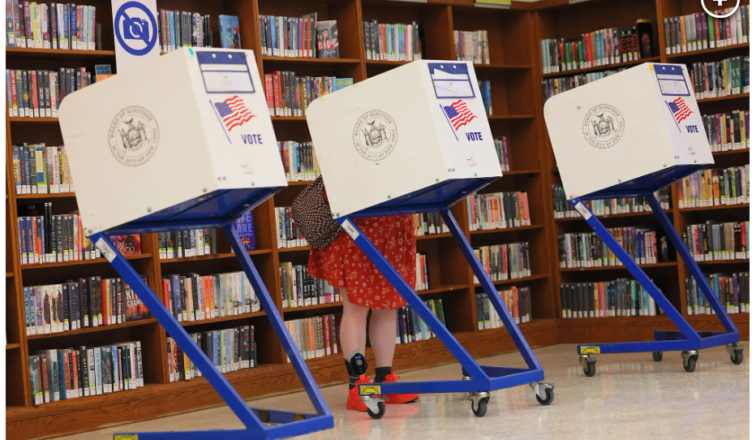 A conservative watchdog group has sued New York elected officials for failing to remove potentially hundreds of thousands of phantom voters from the city voter rolls to help prevent fraud.

In court papers filed in Brooklyn federal court Wednesday, Judicial Watch said the city Board of Elections removed just 22 voters out of 5.5 million over a six-year period from 2016 to 2021 for a metropolis with over 5.5 million voters.

The paltry number of ineligible voters removed from the rolls is a clear violation of the National Voter Registration Act, the suit alleges.

“It is inconceivable that these counties were complying with the NVRA while making almost no NVRA Removals,” the suit says.

At the same time, the suit said more than 600,000 voting-age citizens, per year, are estimated to change residence or relocate from New York City.

By comparison, rural Yates County in upstate New York, with just 14,500 registered voters, made 1,251 removals over the same six-year period.

“This is, literally, an exponentially greater number than the 22 NVRA Removals made during the same period in all of New York City,” Judicial Watch said.

One of the plaintiffs’ lawyers, Neal Brickman, told The Post the voter rolls have to be cleaned up to insure accuracy and to “prevent voters voting multiple times and preventing voter fraud.”

“Members [of Judicial Watch] are concerned that failing to comply with the NVRA’s voter list maintenance obligations undermines the integrity of elections by increasing the opportunity for ineligible voters to intentionally or accidentally cast ballots,” the suit says.

Under federal law, election agencies are required to remove voters from the active registration rolls if they confirm in writing that they have moved out of the area.

Voters also must be purged from active registration lists if they fail to respond to an
official address confirmation notice, or they fail to vote during two general federal elections.

But it gets complicated.

Under the NVRA and New York law, voters whose registrations are inactive may still vote on election day, if they show up. Inactive voters are still registered voters.

The lawsuit lists both officials with the state and city election boards as defendants.

Fred Umane, of the city election commissioners listed as a defendant, declined comment on the litigation.

Doug Kellner, co-chairman of the state Board of Elections, said he hadn’t seen the lawsuit.

“The rules for removing people from the voter rolls are complicated. I’m not in a position to comment on whether the city is complying with the law,” Kellner said.

The city elections board — whose commissioners are elected by party bosses — has been accused of being a bumbling patronage mill instead of a professional agency that administers the machinery of democracy.

But election officials may be leery of purging the voter rolls.

The board admitted to violating election laws by improperly purging 200,000 voters from its rolls ahead of the 2016 presidential primary. That year, 20 percent of trained poll workers didn’t show up to work on Election Day.

It has come under fire for other foul-ups.

And during the 2020 presidential primaries, the board disqualified 80,000 ballots, because officials weren’t ready to handle the increase in mailed votes cast due to in-person voting health concerns caused by the COVID-19 pandemic.

That year, the BOE bungled key components of its early voting program for the presidential election, including allocating ballot scanners without taking demand into consideration and stuffing so many voters into voting sites that it overwhelmed its system, The Post reported.