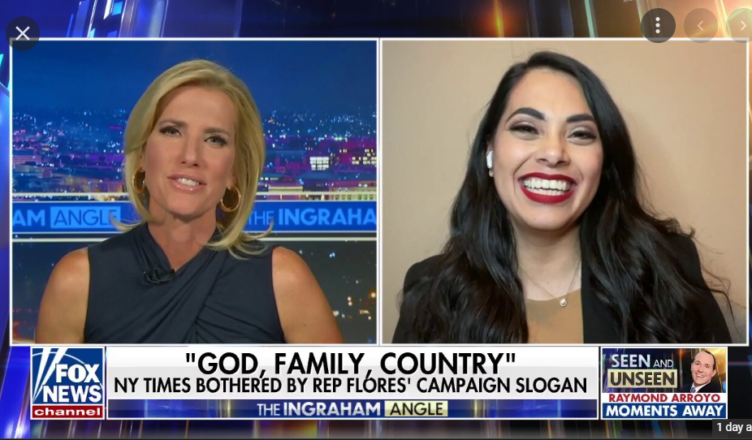 “AOC does not represent the Hispanic community; definitely does not represent Texas District 34 and who we are here,” Flores told Ingraham. “And we’re not worried about the Washington nonsense, Latinx. We’re worried about the cost of living, gas, food, health care. That’s what we’re worried [about] every single day. We’re not waking up and thinking about what’s happening in Washington. They’re just so disconnected. It’s really sad because they think that the world revolves around Washington, D.C., and that’s really not the reality.”

Watch the clip above. Previous reporting below.

Flores punched back against the article, speaking exclusively to Fox News Digital.

“I am proud of my culture and my beautiful family,” Flores says.

“I was born in Burgos, Tamaulipas, Mexico, and raised with strong Conservative values to always put God and Family first. I have received only hate from the liberal media and constantly [been] told by the left to go back to Mexico. They don’t support us immigrants, they only use us for political power and don’t care about our well-being. I am here now and I won’t allow them to continue taking advantage of my people. The NYT knows nothing about me or our culture. Somos gente de Dios, Familia y Travajo [We are people of God, Family and Work], Si Señor!” she wrote.

A New York Times spox told Fox News, “Our story chronicles the rise of Representative Mayra Flores in Texas and her association and amplification of far-right messages and ideology from amplifying QAnon to spreading misinformation about the 2020 election.”