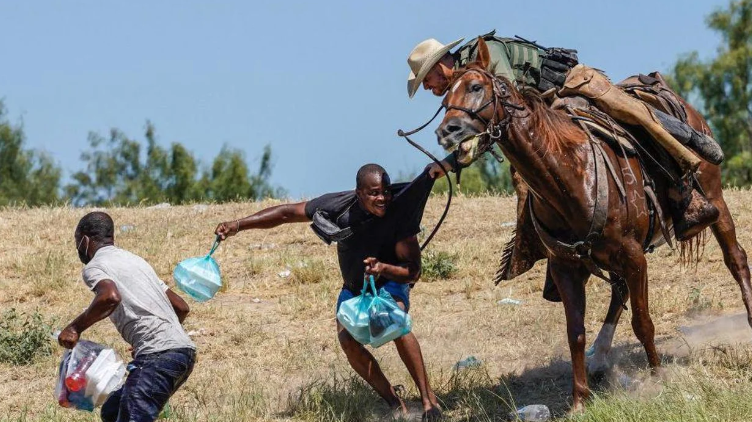 The Biden administration will imminently announce disciplinary action against the Border Patrol agents who were falsely accused of “whipping” Haitian migrants in Texas last year.

Fox News correspondent Bill Melugin, who extensively covers immigration, reported late Thursday that the Department of Homeland Security has prepared “disciplinary proposals” for the agents involved in the incident.

An announcement from Customs and Border Protection disclosing the disciplinary findings against the agents is “imminent,” according to Melugin.

NEW: Per federal source, CBP has sent out the disciplinary proposals for the horseback Border Patrol agents who have been under investigation for claims of “whipping” Haitian migrants in Del Rio, & an announcement from CBP on their administrative findings is “imminent”. @FoxNews

“You knew or should have known that using your horse to block a noncitizen from exiting the water at the boat ramp created an unsafe situation, particularly for the noncitizen, but also for you and your horse,” the charges purportedly add.

On Friday, the Daily Caller reported that it had obtained the documents that outline the disciplinary actions. The documents show that officials have recommended two “charges” against the agents involved.

The first charge levied is for “poor judgement,” according to the Daily Caller, because the agents allegedly told the migrants “to go back to Mexico, or words to that effect.” The second charge is for “unsafe conduct,” because at least one agent maneuvered his horse “in a way that caused a noncitizen to fall backward into the Rio Grande River … thereby compromising the safety of the noncitizen, yourself, and your horse.”

“You knew or should have known that using your horse to block a noncitizen from exiting the water at the boat ramp created an unsafe situation, particularly for the noncitizen, but also for you and your horse,” the charges purportedly add.

The disciplinary proposals also reportedly scold the agents for having “received significant media attention,” which “had a negative impact on the reputation” of the Border Patrol.

After the Border Patrol agents were falsely accused of using horse reins to whip migrants, Homeland Security Secretary Alejandro Mayorkas promised swift consequences for the agents involved. Biden even vowed the agents “will pay” for their actions.

However, the investigation has been anything but swift. Three months ago, it was reported that the DHS inspector general had cleared the agents of criminal wrongdoing, but last month Melugin reported the Biden administration would punish the agents anyway.

The Daily Caller reported that an announcement about disciplinary action could come as soon as Friday.