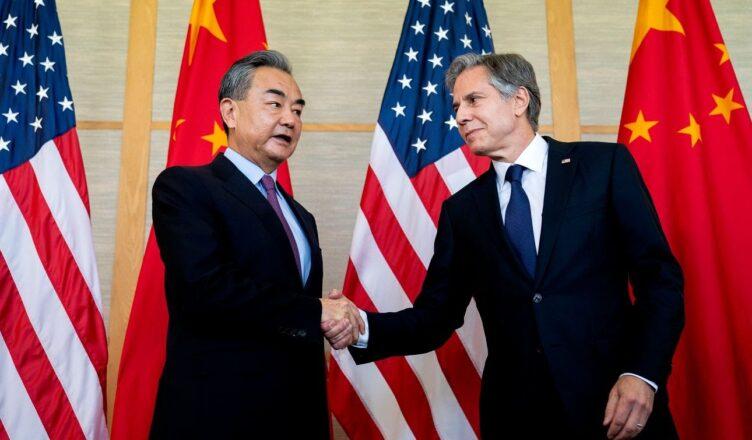 When Secretary of State Antony Blinken meets with Chinese Foreign Minister Wang Yi on the Indonesian island of Bali on Saturday, the FBI will likely be in the process of launching a new probe into Chinese espionage against the U.S. — if it hadn’t already done so earlier in the day.

That’s based on an estimate by FBI Director Christopher Wray, who on Wednesday said his agency opens counterintelligence investigations into China roughly every 12 hours.

Wray was sounding the alarm to business leaders about the threats posed by Chinese espionage, especially theft of Western tech companies’ intellectual property, during a rare joint appearance with the head of Britain’s MI5 domestic security service in London.

“The Chinese government is set on stealing your technology — whatever it is that makes your industry tick — and using it to undercut your business and dominate your market,” said Wray. “And they’re set on using every tool at their disposal to do it.”

This wasn’t the first time Wray issued such a stark warning about Chinese spying.

In late January, the FBI chief described the threats posed by China inside the U.S. as uniquely troubling.

“When we tally up what we see in our investigations — over 2,000 of which are focused on the Chinese government trying to steal our information or technology — there is just no country that presents a broader threat to our ideas, our innovation, and our economic security than China,” he said at the Ronald Reagan Library in California. “The sheer volume of criminal and threatening actions we see from the Chinese government is immense.”

Yet, in between Wray’s two speeches, the Justice Department, which has jurisdiction over the FBI, announced in late February it was ending a program meant to combat the very behavior Wray warned of.

Called the China Initiative, that effort was was launched by the Trump administration in 2018 to preserve America’s technological edge. The program was specifically designed to identify and prosecute those engaged in hacking, stealing trade secrets, and conducting economic espionage for the Chinese government inside the U.S.

The China Initiative led to several arrests and convictions. Most famously, a federal jury in January found Charles Lieber, a renowned nanotechnology professor who chaired Harvard’s Chemistry Department, guilty of lying to government authorities about multiple links to Beijing.

The push to shut down Chinese espionage activities seemed to have deterred at least some potential spies. More than 1,000 researchers who had hidden their affiliations with the Chinese military fled the U.S. in summer 2020, according to the Justice Department. Despite such results, the Justice Department ultimately killed the program, admittedly bowing to pressure from a loose coalition of lawmakers, nonprofits, and academics who argued the initiative targeted people of Asian descent with racial profiling.

“We have heard concerns from the civil rights community that the China Initiative fueled a narrative of intolerance and bias,” Assistant Attorney General Matthew Olsen of the Justice Department’s National Security Division said in a speech announcing the termination of the program. “By grouping cases under the China Initiative rubric, we helped give rise to a harmful perception that the department applies a lower standard to investigate and prosecute criminal conduct related to that country or that we in some way view people with racial, ethnic, or familial ties to China differently.”

Olsen said the initiative’s efforts to prosecute academic researchers with ties to Chinese entities, including the Chinese military, “can lead to a chilling atmosphere for scientists and scholars that damages the scientific enterprise in this country.”

Last week, Rep. Mike Garcia (R-Calif.) proposed an amendment to the House Appropriations Subcommittee on Commerce, Justice, and Science that would reinstate the China Initiative. The measure didn’t pass due to opposition from Democrats.

“Congressman Garcia believes we need to disentangle from China and stop enabling the Chinese Communist Party (CCP),” Noah Sadlier, a spokesman for Garcia, told Just the News. “The recent action taken by Garcia to reinstate the China Initiative should not go unnoticed. This was a critical program that, until its repeal earlier this year by the Biden administration, was proving effective at fighting the CCP’s intellectual property theft machine. We lose between $400 billion and $600 billion annually in intellectual property theft already, and the continual undoing by the Biden administration of programs to put pressure on the CCP’s cheating ways should concern all Americans.”

However, Chinese espionage in the U.S. isn’t just about theft of trade secrets and intellectual property. On Thursday, a federal grand jury indicted a current U.S. Department of Homeland Security agent and a former agent, among others, for involvement in what federal prosecutors called a “transnational repression scheme” of stalking, harassing, and spying on Chinese dissidents living in the U.S. on behalf of the Chinese government.

Republicans in both the House and Senate have challenged the Justice Department’s decision to end the China Initiative, expressing concern about the government’s efforts to combat Chinese espionage.

Earlier this year, following the decision to scrap the program, Rep. Scott Fitzgerald (R-Wisc.) and others introduced the China Initiative Accountability Report Act, which would direct the U.S. attorney general to issue an annual report on the Justice Department’s activities related to countering Chinese threats to U.S. national security.

Fitzgerald told Just the News that China’s theft of intellectual property has severe economic and national security implications for the U.S.

“Although President Trump launched an initiative to counter these espionage efforts,” he said, “unfortunately, President Biden ended the initiative to appease his politically correct base. This bill will take an important step in identifying the ever-growing threats from China and hold this administration accountable to protect U.S. interests and continue the work President Trump spearheaded.”

In his speech earlier this year announcing the termination of the China Initiative, Olsen said that while China “stands apart” as a “brazen” espionage threat, a “broader approach” is needed to confront threats from a “variety” of countries. Olsen called this effort a “strategy for countering nation-state threats.”

The Justice Department didn’t respond to a request for comment to clarify how this new strategy will specifically replace the China Initiative and address Chinese espionage activities given its broad scope.

Just the News reached out to the State Department to see if Blinken will bring up Chinese espionage and theft of intellectual property when he meets with Wang on the sidelines of a ministerial gathering of the Group of 20 leading wealthy and developing nations.

A State Department spokesperson said they had nothing specific to preview regarding Blinken’s upcoming meetings.

When asked whether the department had any comment on U.S. concerns over Chinese espionage and how that may factor into diplomatic discussions with China in light of Wray’s comments this week, the spokesperson declined to comment on “intelligence matters.”