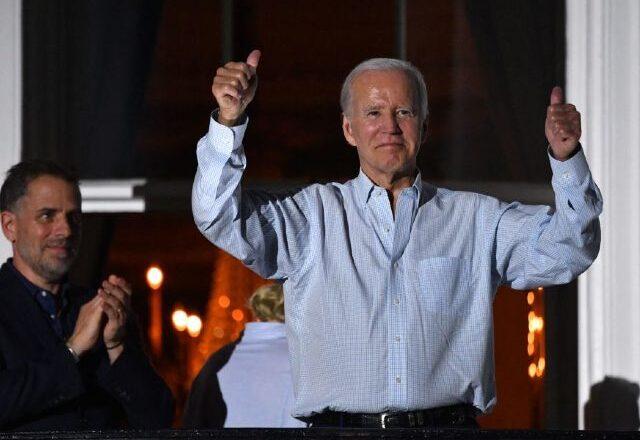 President Joe Biden and his staff continue refusing to answer any questions about Hunter Biden’s corrupt foreign business dealings and information found in his abandoned laptop.

Staff who work for Biden know it is a sensitive subject, and it has been since he was the Vice President in former President Barack Obama’s administration.

“Everyone who works for him has been screamed at,” a former Biden adviser told the New Yorker in a Hunter Biden profile which also reported that others were wary of hurting his feelings.

“It’s like you’ve hurt him terribly. That was always my fear, that I would be really touching a very fragile part of him,” a business associate of Biden’s told the New Yorker regarding difficult conversations about the president’s family.

Biden’s staff refuse to answer questions about it.

Here is a roundup of times the White House refused to answer questions about Hunter Biden and his laptop:

MS. JEAN-PIERRE:  We’re not — from this podium, I am not going to talk about alleged materials from the laptop.  I will — I am not —

Q. So are you disputing that it’s President’s voice on the voicemail?

MS. JEAN-PIERRE: I am not going to talk about alleged materials on a laptop. It’s not happening.

Q. Are you disputing then that it is not —

MS. JEAN-PIERRE: Peter, I refer you to his son’s representative.

Q. The President likes to say “I will always level with you.” He says that again and again. Moments ago, though, you seemed to dismiss Peter’s question about his conversation with his son, Hunter Biden, with regards to his business dealings, and I’m wondering: How is that silence consistent with the President’s promise to always level with the American public?

Because, you know, in public, he says he hasn’t discussed these business dealings. And then, at least according to the voicemail that’s been obtained by the Daily Mail and the Washington Examiner, it certainly seems like he was seeking to do exactly that — have a conversation about these business dealings. Is he leveling with the American public on this?

MS. JEAN-PIERRE: Phil, I hear your question, but what I can tell you from here, standing at this podium, is that I cannot comment on any materials from the laptop. And I would refer you to the representatives of Hunter Biden. That’s what I can share with you at this podium, at this time.

MS. PSAKI: He maintains his same statements that he’s made in the past. I would say — I know you’re referring to WAVES records that were released more than 10 years ago. I really don’t have more detail or information on them. I’d note that there was a gap when WAVES records were not released, but I don’t have more information about visits from more than 10 years ago.

MS. PSAKI: I don’t have any information on that. I’m happy to check and see if we have any more comment.

Q. Okay. On another topic, was it common for President Biden to do favors for Hunter Biden’s international business partners like writing college recommendations for their kids?

MS. PSAKI: I have — I’ve seen the report. I have no confirmation or comments on a report about whether or not the President, when he was a private citizen, wrote a college recommendation letter for an individual.

Q. A college recommendation letter, though, from, at the time, a former Vice President would be a big deal. So, do we know what the President might have gotten in return for doing a favor like that?

MS. PSAKI: Again, I have no confirmation of any recommendation letter the President wrote when he was a private citizen — by the way, not serving in public office. That’s even in the report.

Q. But he’s the President now, and you’re his spokesperson.

MS. PSAKI: Correct. And he was not the President at the time of this report.

Q. So, there’s evidence that the President, at one point, was officemates with Hunter and his brother Jim here in D.C.

Q. That is not accurate? So, when Hunter Biden is emailing a landlord, “Please have keys made available for new officemates — Joe Biden, Jill Biden, Jim Biden,” that — you’re disputing it?

MS. PSAKI: They were not officemates, no.

Q. They were not officemates. Okay.

Q. Okay. On another topic: A lot of stories about Hunter Biden surfacing this week. So, to ensure the independence of the investigation, would the President support the appointment of a special counsel?

Q. Is there any concern that they’re not going to be necessarily seen as being able to make the decisions independently if the White House Chief of Staff is out saying that the President is confident his son did not break the law?

MS. PSAKI: Well, that’s something the President has said and certainly we would echo. But in the same answer to that question, Peter — during an interview this week on ABC, Ron Klain also said the Justice Department is independent and they will make their own decisions.

Q. And the President has said that he never spoke to his son about his overseas business dealings. Is that still the case?

Q. And then one more. The New York Times has authenticated emails that appear to have come from a laptop abandoned by Hunter Biden in Delaware. The President previously said that the New York Post story about this was “a bunch of garbage” and that it was “a Russian plant.” Does he stand by that assessment?

MS. PSAKI: I’d point you to the Department of Justice and also to Hunter Biden’s representatives. He doesn’t work in the government.

Q. And if I may, you were asked about Hunter Biden’s laptop. You also, in October 2020, dismissed it as “Russian disinformation.” Do you stand by that assessment?

Q. One more on Hunter Biden, who has been in the headlines again recently. During the last presidential debate, then-Vice President Biden was asked if there was anything inappropriate or unethical about his son’s relationships, business dealings in China and/or Ukraine. The President said, “Nothing was unethical.” He went on to say, “My son has not made money in terms of this thing about, what you’re talking about, China.” Does the White House stand by that comment that the then-Vice President made?

MS. BEDINGFIELD: We absolutely stand by the President’s comment. And I would point you to the reporting on this, which reference statements that we made at the time that we gave to the Washington Post, who worked on this story.

And — but as you know, I don’t speak for Hunter Biden, so there’s not more I can say on that.

Q. Can I ask you if there have been — if you’re aware if there have been any discussions here inside this White House about whether the President might use his pardon or commutation power with respect to either his son or his brother?

MS. BEDINGFIELD: That’s not a hypothetical I’m going to entertain.  I don’t have anything to add from this podium.

Q. I know Hunter Biden is not a government employee; you don’t speak for him.  Has the President read these reports?  Do you guys take them to him when the inquires come in?  And what has been his reaction to them?

MS. BEDINGFIELD:  I don’t have anything additional to add on this from the podium, but thank you.

Q. The President has said and you have tweeted that allegations of wrongdoing based on files pulled from Hunter Biden’s laptop are Russian disinformation. There’s a new book by a Politico reporter that finds some of the files on there are genuine. Is the White House still going with “Russian disinformation”?

MS. PSAKI: I think it’s broadly known and widely known, Peter, that there was a broad range of Russian disinformation back in 2020.

Q. If I could just follow up on a quote from the President in December. He said, quote, “My son, my family will not be involved in any business, any enterprise that is in conflict with or appears to be in conflict, where there’s appropriate distance from the presidency and government.”

Just recently, there were reports that the President’s son still owns a 10 percent stake in the Chinese investment firm formed with state-owned entities. Do you have an update on the divestment from that investment?

MS. PSAKI: He has been working to unwind his investment, but I would certainly point you — he’s a private citizen. I would point you to him or his lawyers on the outside on any update.

On Friday, the Washington Free Beacon released a report that the Biden Department of Energy sold one million barrels out of the U.S. Strategic Petroleum Reserve to Unipec, the trading arm of Sinopec, a Chinese Communist Party-run gas giant. Sinopec has ties with Hunter Biden. “A private equity firm Hunter cofounded reportedly purchased a roughly $2 billion stake in Sinopec Marketing in 2015,” Breitbart News reported.