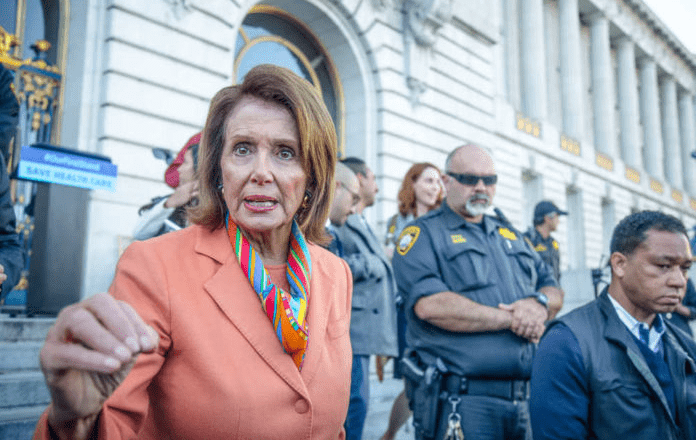 Nancy Pelosi, a California Democrat, visited the Vatican only a few weeks after the Archbishop of San Francisco declared that she would be barred from receiving Holy Communion in the archdiocese because of her steadfast, outspoken support for abortion.

Francis presented newly consecrated archbishops with the woolen pallium stole at the morning Mass celebrating the feasts of St. Peter and St. Paul, which Pelosi attended. According to two persons there, she was sitting in a VIP diplomatic area of the basilica and took Communion among the other worshippers.

While Francis presided over the Mass, he did not personally distribute Communion; Pelosi got it from one of the several priests. To avoid politicizing the sacrament, Francis only infrequently administered Communion while he was the archbishop of Buenos Aires.

Salvatore Cordileone, the archbishop of Pelosi’s home diocese in San Francisco, has declared that she would no longer be permitted to receive the sacrament in his archdiocese due to her support for abortion rights. Conservative commentator Cordileone has said that Pelosi must either renounce her support for abortion or refrain from mentioning her Catholic faith in public.

Pelosi has taken neither action. According to her, the latest Supreme Court decision eliminating constitutional safeguards for abortion is “outrageous and heartbreaking.” It satisfies the Republican Party’s “dark and extreme purpose of snatching away women’s freedom to choose their own reproductive health decisions.”

Pelosi discussed the importance of the Catholic virtues of faith, hope, and charity in the work of the U.S. Embassy while speaking to a group of ambassadors, Vatican officials, and other Americans living in Rome.

She reminded the gathering, “Faith is a gift that not everyone has, but it is the way to many other things.”

President Joe Biden, a fellow Catholic and supporter of abortion rights, said Pope Francis instructed him to continue taking the sacrament after meeting with him last year. Later, Biden took part in a Mass in a Roman church presided over by Francis, the Roman bishop.

Even more noteworthy and an indication that Francis would accept Communion was Pelosi’s participation in the sacrament within the Vatican at a Mass officiated by the pope. “not a prize for the perfect but a powerful medicine and nourishment for the weak,” is how Francis has defined the Eucharist.

Pelosi qualifies as “the weak.”