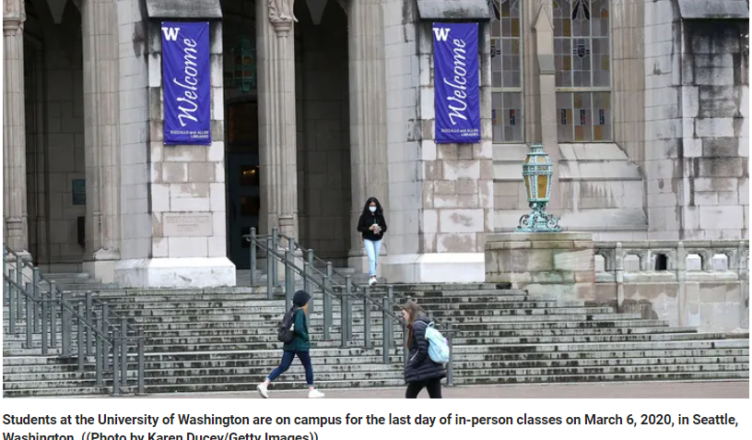 A University of Washington professor is suing the school, arguing that it violated his free speech after he challenged the university’s request that he include a Native American “land acknowledgment” on his syllabus.

Stuart Reges, a computer science and engineering teaching professor, faced disciplinary action from the university after the school encouraged professors to include a statement on their syllabi acknowledging Native American ownership of university land in September 2020, termed the “University’s ‘Indigenous Land Acknowledgment Statement.’”

“What makes situations such as this both newsworthy and troubling is that the rule prohibiting state infringement of the free speech rights of public employees has been settled for decades – but cases such as this come up anyway. Why? Because people in the world of academia are in such a bubble they can’t fathom that their pet social justice initiatives could possibly be trumped by higher values,” Ron Coleman, partner at the Dhillon Law Group, told Fox News Digital.

Reges included a dissenting statement on his syllabus that “challenged his students and fellow faculty to think about the utility and performative nature of land acknowledgment statements,” the filing read.

“It’s a very simple First Amendment case where the university encouraged professors to include land acknowledgments on our syllabus, and they suggested a progressive version of it. I included a more conservative version of it, and they freaked out,” Reges told Fox News Digital.

The university said the statement proved a “disruption to instruction,” to which Reges said he had reviewed his syllabus in class on his first day “without incident.”

University officials proceeded to open a “shadow” class section of Reges’ course, taught by another professor on tape. Students were “invited” to switch out of Reges’ section to the shadow section, according to the filing.

The university also opened a disciplinary investigation into Reges, which currently remains ongoing. Court documents said a disciplinary committee was formed “to consider whether to further punish or even terminate Professor Reges because of the views he expressed in his dissenting statement.” Reges argues in his lawsuit that the possibility of termination has had a “chilling effect on his speech” as a university faculty member.

“It was clear that they wanted a particular kind of land acknowledgment. There was a particular view of American history that they wanted you to affirm, you know, that the United States is evil and that we stole land from native tribes and so forth,” Reges told Fox News Digital. “So I took them up on the suggestion to include one, and I included one that I knew they wouldn’t like because it didn’t match that view of history. And they really went crazy.”

Reges said he wasn’t the only professor to include a “controversial” land statement on a syllabus, saying another faculty member had included “a liberal, very progressive version of the land acknowledgment” in her syllabus. After asking why she was not called upon by the university administration, the university said it was “because students didn’t complain.”

“The issue for them is that if students complain, then they’re going to do something about it. And then it’s just obviously going to work against conservative and libertarian faculty,” Reges said.

The University of Washington argues that it did not violate Reges’ free speech rights, but rather, Reges violated university policies via his syllabus statement.

“The University of Washington is reviewing the complaint. The university continues to assert that it hasn’t violated Stuart Reges’ First Amendment rights and we look forward to making that case in court,” University Spokesperson Michelle Ma told Fox News Digital in a statement.

The conversation about free speech on campuses has gained momentum, with the most recent incident being a now former Georgetown law lecturer placed on leave following his critique of President Biden‘s Supreme Court justice prerequisites of race and gender.

Ilya Shapiro had sent a tweet after Biden said he would nominate a judge based on race and gender, rather than the traditional prerequisites of merit and qualifications. Shapiro proceeded to take down the tweet but stated Georgetown “insinuated” that anything considered offensive could contribute to a hostile educational environment.

“I could not work under that arrangement, so I had to resign,” Shapiro told Fox News’ Tucker Carlson.

Shapiro announced he could not remain at the university in June and accepted a new position at the New York-based Manhattan Institute as director of Constitutional Studies.

“Luckily, the First Amendment is one value [the university] will have to reckon with. The U.S. Supreme Court has never been more jealous of the rights it protects than it has in recent years. But the University’s willingness to invest in setting themselves up for an obviously meritless defense against these claims is chilling indeed,” Coleman said.