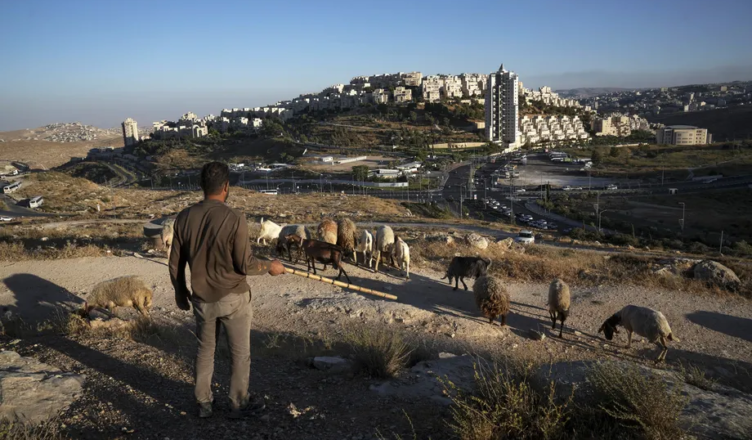 As Biden visits Jerusalem, two states are more elusive than ever.

When President Joe Biden discusses Israel, he sounds like he is trapped in the 1990s, when the US had just begun shepherding negotiations between the Israelis and Palestinians and two states for two peoples seemed within reach. “Greater peace. Greater stability. Greater connection,” Biden said upon arriving in Israel on Wednesday. “A two-state solution. That remains, in my view, the best way to ensure the future of equal measure of freedom, prosperity, and democracy for Israelis and Palestinians alike.”

But the reality in 2022 does not match Biden’s rhetoric or America’s long-held stance. The entrenched occupation of Palestinians living in the West Bank and Jerusalem, and the strangulation of those in Gaza, makes the creation of a viable, independent Palestinian state — the stated policy of the Biden administration — all but impossible.

The growth of Israeli settlements in the occupied Palestinian territory has expanded to new levels, with more than 685,000 Israeli settlers in the West Bank and Jerusalem, according to Israel census data compiled by the nonprofit Peace Now. That path to an independent Palestine seems increasingly untenable, in part because so much of what would be that state in the West Bank and its capital, in East Jerusalem, has been taken over by settlers with tacit and overt support of the Israeli state.

The US is Israel’s most powerful international backer and closest partner. “America is the biggest enabler of the settlement project, because America has the biggest stake and the biggest leverage on the Israeli government,” said Michael Sfard, an Israeli lawyer who represents human rights groups and is an expert on illegal settlements. “For years, Israel was allowed to build settlements, to expand settlements, to confiscate Palestinian lands, to retroactively legalize — or kosher — major trespasses into private or privately owned Palestinian lands. And America has done nearly nothing to stop it.”

How Israeli settlements have expanded

Severe setbacks for the two-state solution have made US policy seem far-fetched at this point.

That reality came across in Biden’s remarks. “We’ll discuss my continued support — even though I know it’s not in the near term — a two-state solution,” he said upon his arrival this week. He conceded that such an outcome was elusive, while still clinging to it

A number of factors have contributed to the declining prospects for an independent Palestinian state. Not enough US diplomatic muscle has been put into making the deal happen. The recently disbanded Israeli government didn’t even agree to it as policy (and the previous prime minister, Benjamin Netanyahu didn’t really, either). Divisions between the Palestinian leadership in the West Bank and Gaza have detracted from the Palestine Liberation Organization’s authority and legitimacy as a negotiating partner. And wealthy Arab states, like the United Arab Emirates and Bahrain, have prioritized normalizing relationships with Israel — which come with economic and tech cooperation, defense business, and weapons sales — at the expense of Palestinian rights.

But the largest by far is the rampant expansion of settlements in the West Bank that has precluded Palestinians from living there.

After the 1967 war, Israel came into possession of the West Bank, East Jerusalem, Gaza Strip, and Golan Heights. This was, under international law, occupied territory. There were some people within Israel who saw this as an opportunity to negotiate with Arab states and the Palestinians, and trade this land for peace (which is what ultimately happened with the return of the Sinai and Israel’s 1979 peace agreement with Egypt).

But there was a portion of Israelis and the American Jewish community who saw this occupied territory as a chance to widen Israel’s borders beyond the green line, or the 1949 armistice border that had long demarcated the state of Israel, and enlarge the country to what they saw as its biblical or historic land. Part of this project was religiously and ideologically motivated (Hebron in the occupied West Bank, for example, figures largely in biblical lore); and part of it related to security. By occupying and developing key pieces of land on the Jordan River and in the Jordan Valley, especially those at a high elevation or along transportation corridors, Israel could better protect itself.

“What started out as a bunch of pins thrown up on a map became a deep network crisscrossing the West Bank of Israeli Jewish settlements, established in strategic locations,” Lara Friedman, president of the Foundation for Middle East Peace, told me. Those new informal communities grew into developments and cities, “erasing the Green Line, so you can no longer see what is Israel,” according to Friedman. She says that settlers deliberately sought to “prevent the connection and expansion of Palestinian localities in the West Bank.”

In the early 2000s, amid the Second Intifada or Palestinian uprising, and in response to several terrorist attacks, Israel began building a separation barrier — what Palestinians call the apartheid wall. The 30-foot-tall concrete wall snakes throughout the occupied West Bank, not following the contours of the Green Line but gobbling up Palestinian land. The result is a broken archipelago of Palestinian cities and communities, separated by walls and settlements that make Palestinian life disconnected bantustans. (Israeli Prime Minister Ariel Sharon oversaw the withdrawal of Israeli settlers from Gaza in 2005, but Israel maintains total authority over Gaza’s airspace and land and sea borders, controlling what goes in and out of the territory.)

That separate legal systems are enforced for Israeli settlements and Palestinians in West Bank has led human rights organizations, including the Israeli group B’Tselem, to label the occupied West Bank as an “apartheid regime.”

The recent Israeli government of Naftali Bennett and Yair Lapid, according to Peace Now, has presided over a massive rise in settlement construction permits and escalating Palestinian home demolitions. Israeli settler violence against Palestinians has also increased from the Netanyahu years.

“What we’re sometimes missing is that the settlements are not only destroying the possibility to undo them, but they are harming right now the lives of the Palestinians,” Hagit Ofran of Peace Now’s Settlement Watch project told me. She emphasizes how settlers dispossess Palestinians of their own land and properties. “Even now, we see it very blatantly with violence and kicking them out physically from their fields,” she said. “And the settlers have now a very strong political power in Israel.”

US policies have at times enabled Israel as it pursued settlement growth in spite of an established State Department opinion that considered them illegal. But in 2019, President Donald Trump ruptured four decades of US policy by recognizing settlements in the West Bank as not violating international law.

That was in contrast to the Obama administration, which had made a partial freeze of settlements a cornerstone of a policy that it had hoped would lead to the relaunch of Israeli-Palestinian negotiations over the two-state solution. (Those talks ultimately failed in the face of Netanyahu’s recalcitrant leadership and as domestic politics in the US made it difficult for President Barack Obama to take a tough line.)

When Biden visited Israel in March 2010 as vice president, Israel announced 1,600 new settlement units in East Jerusalem, which under international law is considered occupied territory. “I condemn the decision by the government of Israel,” Biden said at the time.

It was hugely embarrassing.

“The political animals around Biden have learned all the wrong lessons from the Obama era,” Friedman told me. “The main lesson they learned was, ‘We don’t want to fight with Israel over settlements, or anything really.’”

This time around, Biden’s team went out of its way to avoid a replay of the 2010 debacle and ensure no new settlement building would be announced while Biden is in the Middle East. The State Department’s top Middle East official, Barbara Leaf, went to Israel last month and asked the Israeli government to forestall any new settlement announcements, Israeli military moves, or demolitions of Palestinian homes. The result: The construction of new settlements and outposts has been postponed until after Biden leaves the region.

As president, Trump reversed decades of US policy toward Israel: He declared that settlements didn’t violate international law, shuttered the US consulate in Jerusalem that in effect served as an embassy for Palestinians, and moved the US embassy from Tel Aviv to Jerusalem, which is occupied territory according to international law. The Trump administration also threw aside Israel-Palestine talks entirely in favor of a policy of ignoring Palestinian rights and normalizing Israel’s relations with Arab states like the United Arab Emirates, Bahrain, and Morocco.

“I don’t want to brag that we’ve won,” Yigal Dilmoni, the CEO of the settlement council, said in 2018. “Others would say it appears that we’re winning.”

Now, Biden is de facto continuing many of these policies. Though his administration has returned to funding the United Nations aid agency for Palestinian refugees and made efforts to restore diplomatic ties with Palestine, the administration hasn’t officially undone Trump’s policy toward Israeli settlements — something that Politico correspondent Nahal Toosi has persistently been asking the administration about, though Biden’s team tends to ignore the line of questioning.

The US could take specific moves to curb settlement growth, says Yousef Munayyer of the Arab Center Washington. “The idea that land cannot be taken by force is a fundamental norm in the post–World War Two era,” he said. “What I would like Biden to do on settlements is exactly what he would do on settlements if there were Russian settlements being built in Ukraine. And I think he knows exactly what he would do.” There would be economic sanctions and intensive diplomacy with ultimatums, not silence.

The most obvious, considering the extent of human rights violations, would be the US withholding the multibillion-dollar annual military aid package to Israel or portions of loan guarantees (as the George H.W. Bush administration did). Other options would be making critical public statements or pursuing hard-nosed private diplomacy (like no White House visits or Pentagon meetups until Israel changes its policies). “We know the White House has the tools, but they don’t have the will to use the tools,” Munayyer told me.

Though the Biden administration may say the right things, it appears that they’ve made a political judgment not to quibble over settlements. So you get comments like this from State Department spokesperson Jalina Porter — “Israel’s program of expanding settlements deeply damages the prospect for a two-state solution” — but no American leverage or influence to back up the criticism.

The US has long used its UN Security Council veto to insulate Israel from criticism. But when member states brought forward a resolution condemning Israeli settlement activity at the end of Obama’s term in December 2016, the US let the resolution pass. Then-Secretary of State John Kerry defended the move, saying that settlements are detrimental to Israeli security and undermine the possibility of two states. As Kerry put it then, “it is the permanent policy of settlement construction that risks making peace impossible.”

In the years since, there have been 71,390 more Israeli settlers, bringing them to over 685,000 — and the number continues to grow.