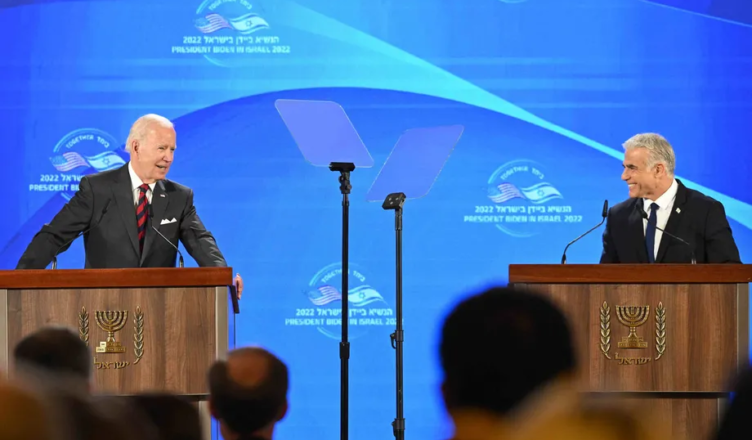 JERUSALEM — After President Joe Biden stepped off the plane at Israel’s Ben Gurion Airport, Israeli Prime Minister Yair Lapid greeted him with a memory from eight years ago.

“You told me [then] that if you had my hair, you would be president of the United States,” Lapid recalled. “I said to you that, if I had your height, I would be Israel’s prime minister.”

During the tarmac welcoming ceremony, Lapid described Biden as “a great Zionist and one of the best friends Israel has ever known.” At a Thursday press conference, the two men swapped kind words and even cracked a joke or two.

This warm reception for a Democratic president in Jerusalem is more than a little unusual, at least as far as recent history goes. During Benjamin Netanyahu’s long tenure, from 2009 to 2021, the right-wing Israeli prime minister acted almost like a partisan agent, working with Republicans to undermine Barack Obama’s Middle East policy and embracing Donald Trump in a way few other democratic leaders would.

“Netanyahu turned [Israel] into a wholly owned subsidiary of Trump and the GOP: the geopolitical equivalent of anti-vaxxers,” says Daniel Seidemann, a Jerusalem-based lawyer and leading expert on the Israeli-Palestinian conflict.

Lapid’s immediate predecessor, Naftali Bennett, attempted to undo what Netanyahu had wrought, journeying to Washington for a friendly meeting with the president. But Bennett, the leader of a right-wing faction, was not a natural Biden ally. The centrist Lapid is: He and Biden are the first president-prime minister pair to truly support a Palestinian state in nearly 15 years.

But the affinities between Biden and Lapid run deeper than policy. Both leaders represent a kind of consensus-based politics, seeing their central tasks as saving their country’s democracy from the ravages of political polarization. They both believe their nations are made up of fundamentally decent people who have been cynically divided by their authoritarian-minded predecessors — Trump and Netanyahu, respectively. They see their primary responsibility as not only keeping the far-right menace out of office but undoing the damage it’s done to the polity itself.

Whether they can deliver on this lofty aim is far from clear. Biden and Lapid are in weak political positions ahead of critical fall elections in both countries, which could well lead to a Republican-controlled Congress and Netanyahu’s return to the premiership. And there are good reasons to think that the crises of Israeli and American democracy run far deeper than Biden and Lapid suggest: rising from fundamental forces that no one leader could hope to tame.

Netanyahu, Trump, and the perversion of the US-Israel relationship

According to the Israeli and American governments, Biden’s visit to Israel is an occasion to announce a new strategic partnership document. In reality, the announcements are not the kind of game changers that would merit a presidential visit on their own.

It’s possible to see Biden’s Israel visit as merely a pit stop on his way to Saudi Arabia. Biden wants to enlist the oil-producing kingdom’s help in taming inflation, his biggest political and economic liability, and is seeking to repair relations with a human-rights-abusing government he once vowed to turn into a “pariah.” The Israel visit seems, at least in part, an attempt to avoid the appearance of snubbing America’s closest Middle East ally before the president reaches his true destination.

But it’s also possible to see Biden’s stop in Jerusalem as an attempt at resetting a relationship, just as much as his visit to Jeddah: not just between the United States and Israel, but between Israel and the Democratic Party.

For most of modern American history, support for Israel was a thoroughly bipartisan issue, with both Democrats and Republicans generally taking the Israeli side in the conflict with the Palestinians. But beginning around 2015, the Democratic preference for Israel began to decline and ultimately eroded entirely. Today, Gallup data shows that roughly as many Democrats take the Palestinian side as Israel’s.

There are deep reasons for this development, including the leftward drift of the Democratic Party and the increasingly entrenched occupation of Palestinian lands. But a significant amount of blame rests with two men: Netanyahu and Trump.

During the Obama administration, Israel’s prime minister frequently clashed with his American counterpart on issues like West Bank settlement expansion, which Obama tried to freeze and Netanyahu accelerated. In 2012, Netanyahu all but openly endorsed Mitt Romney for president. In 2015, he coordinated with congressional Republicans to give a highly unusual speech to Congress opposing the Iran nuclear deal — effectively whipping votes against Obama’s signature Middle East policy accomplishment.

The anti-Obama activity, especially the Iran speech, infuriated both Democratic elites and rank-and-file voters. But the real coup de grace came in the next administration, when Netanyahu embraced Trump — going so far as to put up giant campaign posters in Israel with his face on them. Trump, for his part, publicly embraced Netanyahu’s right-wing vision for Israel — appointing a pro-settlement ideologue ambassador to Israel, moving the US embassy to Jerusalem, abandoning the Iran nuclear deal, and proposing a “peace plan” that gave the Israeli right everything it wanted.

None of this would have happened under a Democratic president. Much of it would have been unthinkable among prior Republicans. But Netanyahu correctly assessed that he and Trump were alike: both disdainful of Arab Muslims, both unconcerned with human rights, and both willing to run roughshod over their country’s democratic institutions in pursuit of power.

Under Netanyahu and Trump, the US-Israel relationship became a perversion of the classic idea of an alliance grounded in “shared democratic values.” The values they now shared were both anti-Democratic and anti-democratic: hostile to a political party and the foundations of a free political system.

Lapid, Biden, and the precarious politics of pro-democracy centrism

A few months after Biden took office in 2021, Lapid managed to stitch together a broad coalition of parties opposed to Netanyahu after four successive elections yielded inconclusive results. For the first year, he agreed not to serve as prime minister despite his centrist Yesh Atid party holding the most seats in the Knesset (Israel’s parliament) of any coalition party. Instead, he allowed Naftali Bennett, leader of the right-wing Yamina party, to take the top spot at the outset to guarantee his participation in an alliance with the center and left.

The change in leadership in both Washington and Jerusalem created an opportunity for a recalibration of the US-Israel relationship. But Bennett, a right-winger at least as opposed to a Palestinian state as Netanyahu, was not an ideal messenger for a rapprochement with the American center left.

Ironically, the coalition’s collapse three weeks ago may end up making the US-Israel relationship a bit smoother (at least temporarily). The agreement between Bennett and Lapid dictates that, in the event of a collapse, the latter will serve as prime minister till new elections can be held. So for now through the November 1 election, and possibly longer, a centrist supporter of the two-state solution will serve as Israel’s prime minister — the first time this has been the case since Ehud Olmert left office in early 2009.

But Biden and Lapid share more than political positions: They have both developed a similar diagnosis about what’s gone wrong in their respective countries and how to fix it.

In Biden’s inaugural address, he told Americans that “this is our historic moment of crisis and challenge, and unity is the path forward.” Meeting this challenge, he argued, meant ending “this uncivil war that pits red against blue, rural versus urban, conservative versus liberal.” It also meant confronting the political actors responsible for dividing America: those who practice the politics of “demonization” and spread lies “for power and for profit.”

In Lapid’s first televised address as prime minister, on July 2, he struck a similar note. “The great Israeli question is actually why, in a period in which we have wide national agreement on all the important topics, the levels of hate and anxiety within Israeli society are so high,” he said. Like Biden, Lapid blamed his country’s intense divisions on political figures who stoked division for partisan gain:

In Israel, extremism doesn’t come from the streets to politics. It’s the opposite. It flows like lava from politics to the streets. The political sphere has become more and more extreme, violent and vicious, and it’s dragging Israeli society along with it. This we must stop. This is our challenge.

Both leaders, in short, believe that their democracies are in crisis: that their predecessors ginned up internal conflict for political gain, demonizing minorities and political enemies, and pushing the political system to a breaking point. They see their central tasks as stitching a broken country back together, uniting a citizenry that, in their minds, has more in common than that which divides it.

Their quests, if successful, would not only safeguard democracy at home but also ground the US-Israel alliance in truly shared democratic values. But that is a very big if.

Both Biden and Lapid are facing difficult elections in November. Polling data suggests Democrats are very likely to lose control of at least one house of Congress and possibly both, with a Trump candidacy looming in 2024. Israeli polls reveal an electorate as profoundly divided between pro- and anti-Netanyahu parties as ever, one that could very plausibly return the former leader to power if a few things break his way.

For all the blame Biden and Lapid have heaped on their polarizing predecessors, there is little acknowledgment that there’s also a demand-side issue — many citizens have heard what Trump and Bibi have to say and continue to find it appealing. Biden and Lapid’s core theory — that a centrist consensus lurks beneath the surface of intense polarization, ready to be brought out by a daring politician — seems questionable at best.

Perhaps this should not be very surprising. The success of anti-democratic demagoguery in the United States and Israel is part of a global trend, one that encompasses countries as diverse as India, Hungary, the Philippines, and Brazil. No one has found a silver bullet that pro-democratic leaders can use to manufacture a new consensus that can exclude these forces from power; the roots of their support run too deep. Expecting Biden and Lapid’s coalition to solve such a problem after roughly a year in power is expecting a miracle.

Yet that’s what Biden and Lapid have promised, to their own citizens and to each other. They aspire to rebuild a democratic foundation not only for the US and Israel, but for the US-Israel alliance. The bricks might be crumbling even before they’ve been put in place.