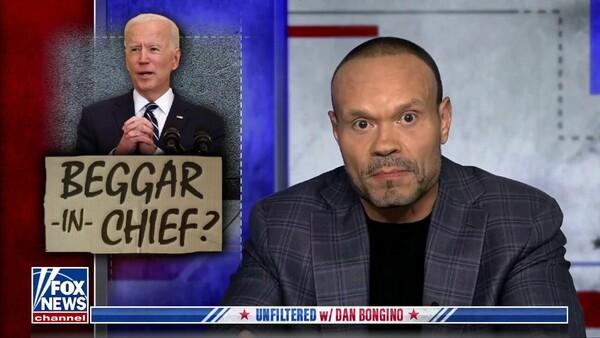 On the most recent episode of Unfiltered With Dan Bongino over the weekend, Dan opened with a monologue on Joe Biden’s status as “beggar-in-chief” on the world stage.

From issues ranging from the border crisis to inflation and gas prices, Biden has always resorted to blaming and begging rather than leading, and the consequences have been impossible to ignore. After all, can anyone even think of a single crisis thus far during his administration (of which there have been many) that has been solved?

I wish American leadership under Joe Biden was not a complete embarrassment, simply for the sake of my country and, as I said, my kids. But in the first 18 months of Biden’s term, it’s totally evident now, he’s become the beggar-in-chief. He’s always begging. Did you notice that? He’s always begging someone for something. The guy’s not a leader. He’s showing just how weak he is on the world stage, on the domestic stage, everywhere, and sadly, he’s making all of us, America, look weaker too.

He’s always begging. When he only has weakness, he’s left to beg our allies and our enemies to help him solve our crises. The man’s the beggar-in-chief.

Now he’s begging Saudi Arabia to help, but there is one silver lining to this mess, believe it or not. All of Biden’s pathetic begging, as members of his own party, the liberal media and same people all over the cosmos doing some begging too, begging him to please not run in 2024. And to sum it all up, being a beggar-in-chief, on a deadly, serious note, is totally unacceptable.
Watch below: