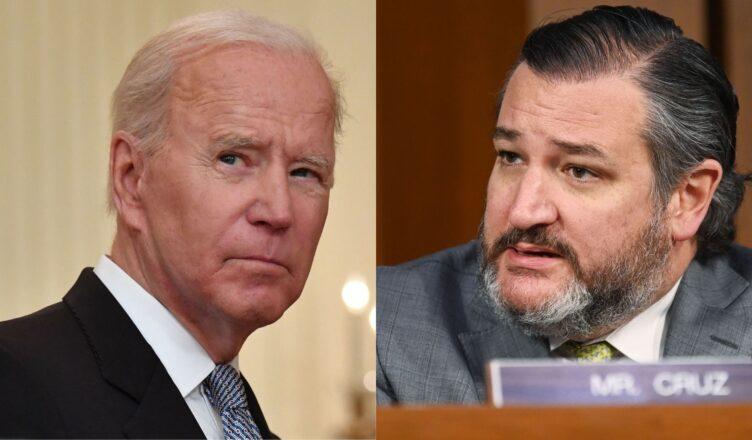 Group of senators visited the border as U.S. reported that more than 2 million migrants were apprehended in fiscal 2022 through June.

Seven Republican U.S. senators are expressing outrage at the “horrific” situation at the U.S. southern border after visiting the Rio Grande Valley.

The group was led Friday by Texas Sens. John Cornyn and Ted Cruz.

Cruz described going out on a midnight patrol with Border Patrol and within minutes they “encountered a group of illegal aliens. First group was teenagers from Guatamala and Mexico.”

The next group was mostly women and children, he said, including two 7-year-old girls who were unaccompanied minors. They weren’t sisters and weren’t brought by relatives.

”They’d just gone through a horrific journey with human traffickers,” he said.

“We met with ranchers, farmers who are absolutely furious that they can’t be safe on their own property,” he said, adding, “What is infuriating is that this is all deliberate. This is a result of deliberate political decisions from Joe Biden and Kamala Harris.

“In our nation’s history, there’s never been a president engage in a greater dereliction of duty on our border than Joe Biden. He utterly refuses to do his job to enforce the border.”

“We cannot accept this as the new normal in Texas, or in America … This is a battle that we did not ask for, but we must fight and we must win.”

They participated in a night and aerial border tour, met with local landowners, elected officials and law enforcement in the RGV Sector. The RGV and Del Rio Sectors are the most trafficked along the entire southern border. Agents in these sectors apprehended 45,085 and 46,216 people, respectively, last month.

The senators visited the border as U.S. Customs and Border Protection reported that more than 2 million people were apprehended at the southern border in fiscal 2022 through June, the greatest number in a fiscal year in U.S. history. Last month, 207,416 people were apprehended, the highest number recorded in June in the history of the Department of Homeland Security.

Lankford said after meeting with landowners, “all they could say is how dangerous this is, how lawless this is … people shoot around them … they find dead bodies [on their property].” On one ranch, they’ve found over 100 dead bodies, he said. “This is life along the river … lawlessness in this area.”

Ernst said “I’m horrified by what I’ve seen. As a mom, hearing of young girls suffering unimaginable abuse at the hands of the ruthless cartels is truly heartbreaking.”

Johnson said RGV Sector agents explained in a briefing that they were encountering 23,000 people a week.

“Now calculated, that generates for those human traffickers $153 million a week,” he said. “That translates to $18.3 billion per year. That’s what the human traffickers are generating in revenue just from the people Border Patrol encountered. Think of all the got-a-ways.”

Johnson said since Biden took office, he “dismantled all the successful programs that had pretty well secured the border, stopped the flow of unaccompanied children and family units exploiting our laws” and the U.S. “had actually reduced the number of single adults coming across the border.”

The Biden administration “is facilitating the multibillion-dollar business model of some of the most evil people on the planet,” he said. “And you come down here and you just get a small sense of the deprivations, and it is profoundly disturbing.”

U.S. Rep. Vicente Gonzalez, a Democrat in the RGV running for reelection against newly elected Republican Maya Flores, told KRGV News that “Democrats are in Washington getting things done.”

He also said he co-founded the bipartisan Border Tech Caucus “to ensure our border patrol officers have modern resources to protect our country.” Gonzales said House Democrats passed “immigration legislation that is now sitting in the Senate because Republicans would rather obstruct than have actual results.”

The Republican senators were “once again using the Rio Grande Valley as a political backdrop for campaigning, thinking residents are naïve,” he said,. They “overplayed their card, insulting local law enforcement and Border security personnel while underestimating the people of our region.”

But Flores, who’s married to a Border Patrol agent, said, “Nobody wants to talk about the impacts of illegal immigration. Yes, a high percentage of women and children are being raped and being sold for sex trafficking. Those are the facts. We must go hard after those criminals and organizations that support sex trafficking.”