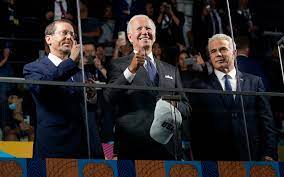 AUnited Nations committee on Thursday and Friday denounced American failures in combating racial discrimination as part of a global review process embraced by the Biden administration to address “systemic racism” and other “inequities” at home.

The administration sent a 23-member delegation, including senior officials from across the executive branch, to Geneva, Switzerland to appear before the U.N. Committee on the Elimination of Racial Discrimination.

The committee is comprised of 18 independent experts who evaluate how countries adhere to a U.N. convention on eliminating all forms of racial discrimination, which the U.S. ratified in 1994. This week marked the first regular review of America’s record since 2014.

U.S. officials argued the country’s case, presenting a report on the implementation of America’s obligations under the convention and outlining “actions taken by the U.S. government to promote racial equity and address systemic racism and discrimination,” according to the State Department.

The U.S. delegation also responded to questions from committee members, who will issue their findings at the end of the month.

While the findings aren’t out, it appears they’ll be critical based on this week’s hearings, which addressed a range of issues such as health care, policing, gun violence, voting rights, immigration, and environmentalism, among others.

The committee lambasted the U.S. for not doing enough to address and eliminate racial discrimination, according to rights advocates who traveled to Geneva to participate in the hearings.

“The committee unequivocally rebuked the United States for failing in almost every racial justice issue covered by the anti-racism treaty, which it directly linked to the legacies of slavery and colonialism,” wrote Jamil Dakwar, head of the American Civil Liberties Union’s human rights program.

Before the panel’s review, the ACLU and Human Rights Watch released a joint report they submitted to the committee slamming America’s racial justice record.

“Decades after the U.S. committed to end racial discrimination, systemic racism continues to infect our institutions,” Dakwar said in a statement upon the report’s release. “The Biden administration has shown it can name the problem, but the time has come to take bolder action to radically transform these abusive systems and fully implement U.S. human rights obligations.”

According to Haitian Bridge Alliance Legal Director Nicole Phillips, who was also observing the hearings, the U.N. committee asked U.S. officials “to justify discriminatory immigration policies, particularly with impact on asylum seekers of African descent.” Phillips called the questioning a “major victory,” describing how the panel castigated the situation at the U.S. southern border as harsh and discriminatory and seemingly advocated a much more permissive immigration policy.

During the hearings, the committee members called out what they described as systemic racism deeply entrenched in the U.S., while discussing several U.S. political issues that generally aren’t discussed at global forums.

Committee members then criticized gerrymandering and “artificial and unnecessary voter identification requirements” implemented by some Republican-led states to protect against voter fraud. They called for the U.S. delegation to provide updates on a bill that would make Washington, D.C. a state — saying such legislation would “enable residents … to participate fully in their country’s democracy” — as well as updates on efforts to establish a committee to explore the idea of giving reparations to African-American descendants of slaves.

One member also asked the U.S. delegation for information on the government’s commitment to establish a “permanent federal body” to coordinate the implementation of the convention and other human rights obligations.

Such recommendations will likely not land well with Americans concerned about international bodies potentially violating U.S. national sovereignty — an issue on which Just the News has previously reported in the context of a global pandemic treaty.

Unlike the Trump administration, which withdrew from the U.N. Human Rights Council, the Biden administration has engaged the global body’s human rights system, arguing that by doing so, “positive change is within reach.”

Experts have warned, however, that such engagement must be used to hold the world’s most egregious human rights violators accountable for their actions, not the U.S.

“As the Biden administration intensifies U.S. engagement with the U.N. Committee on the Elimination of Racial Discrimination and other portions of the U.N. human rights system, it should ensure that it does not fall into the trap of enabling China and others of the world’s worst human-rights-abusing governments to distract from their own egregious and widespread violations by focusing U.N. resources on investigating and condemning the United States’ more minor and less extensive problems,” said Orde Kittrie, senior fellow at the Foundation for Defense of Democracies. “The U.S. has an exceptionally good human rights record. U.N. resources should be focused on probing the egregious human rights violations that occur systematically in so many other countries around the world, including especially China.”

Still, the Biden administration has publicly endorsed and embraced a U.N. review of America’s human rights record since last year.

“The Biden-Harris administration is deeply committed to addressing the challenges of systemic racism both at home and abroad, including the structures, policies, laws, and practices that sustain racial injustices,” the State Department said in a statement before the Geneva hearings. “The administration further believes that any pledge to advance human rights around the world must begin with a pledge to advance human rights at home.”

Secretary of State Antony Blinken expressed similar sentiments last July when he invited U.N. experts to visit the U.S. to address domestic “racial injustice and inequities,” arguing the U.S. must lead by example.

“Responsible nations must not shrink from scrutiny of their human rights record; rather, they should acknowledge it with the intent to improve,” Blinken said at the time. “I urge all U.N. member states to join the United States in this effort, and confront the scourge of racism, racial discrimination, and xenophobia.”

A few days later, Thomas-Greenfield added, “If we are going to be a voice around the globe for raising issues of human rights, we cannot whitewash our own issues in our own country.”

State Department spokesman Ned Price retweeted Thomas-Greenfield’s comments, writing, “We must continue to reflect upon the inequities here at home and recommit ourselves to fighting for justice and human rights.”

Biden himself said last year that the conviction of former Minneapolis police officer Derek Chauvin for the death of George Floyd allowed the world to see “the systemic racism that is a stain on our nation’s soul.”