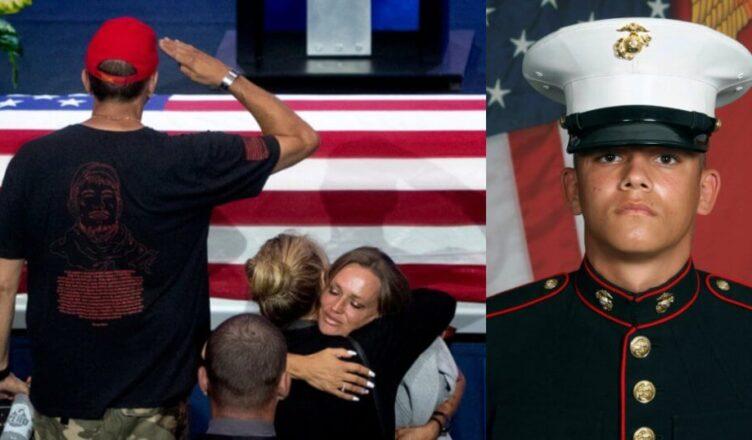 During a memorial for his brother, a Marine killed by an explosion at Kabul’s airport, a California man reportedly committed suicide.

Lance Corporal Kareem Nikoui, 20, of Norco, California, was one of 13 American troops killed Aug. 26, 2021, by a suicide bomber who detonated an IED outside the Kabul airport, according to a Fox News report. Lance Cpl. Nikoui was among the service members helping crowds of Americans and Afghan allies trying to leave Afghanistan after Taliban fighters entered the capital city, Kabul.

His sister, Shyler Chappell, said after his death that the family heard he kept going back into the airport to rescue families with children, according to a Press-Enterprise report. Chappell understood he had returned again to pull more children to safety when the explosive was detonated by the suicide bomber.

A bare bones release from the Riverside County Sheriff’s Department announced the August 9 death of Nikoui’s brother. The sheriff noted 28-year-old Dakota Halverson died at 7:09 a.m. in Norco’s Pikes Peak Park. “Refer all inquiries to investigating agency,” was the only other comment provided by Sheriff-Coroner Chad Bianco in the release.

“The older brother of one of the 13 KIA in Kabul recently killed himself at his little brother’s memorial,” the congressman stated. “Please pray for his family. There MUST be accountability for this continued carnage.”

Waltz’ post included a retweet of a message from Townhall writer and former Marine, Julio Rosas.

“Heartbreaking: Shana Chappell, who lost her son LCpl. Kareem Nikoui in the attack during the Afghanistan evacuation last year, announced her son Dakota died this morning,” remarked Rosas Tuesday. His post included a graphic of a statement from Halverson’s mother, Shana Chappell.

She explained the month of August has been hard for her since it marks the one-year anniversary of her Marine son’s death in the line of duty. Now further tragedy has made August more difficult.

“I look at my kids as strong and like they can handle anything,” Shana Chappell began. “That was my mistake.”

“My son Dakota has been talking a lot lately about how he just wants to be with Kareem, how much he misses him, etc.,” she added. “We all feel that way so I didn’t see the signs.”

“This morning, my son Dakota went to be with his brother Kareem,” the distraught mother continued. She added that a link to a Gofundme campaign to pay for burial expenses was on her facebook page.

“I am still in shock over this right now,” Chappell concluded, “and I can’t believe it’s real so please don’t think I’m rude if I don’t reply back to your comments or messages.”

“I just need some time.”