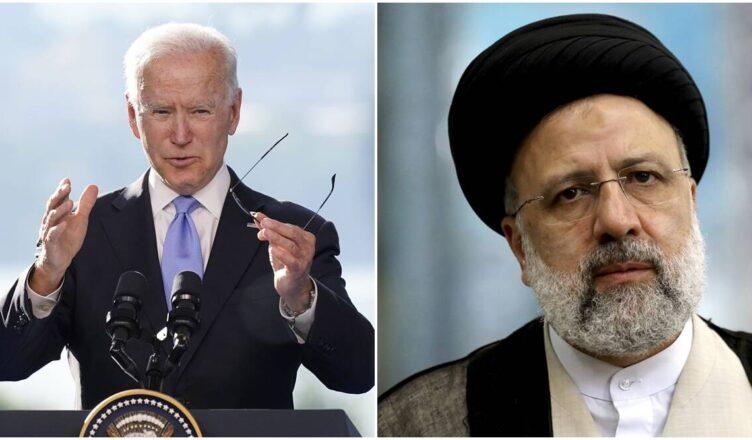 The Biden administration is coming under intense, bipartisan pressure to ban Iranian President Ebrahim Raisi from entering the U.S. to attend the United Nations General Assembly in New York next month.

The push to ban Raisi comes amid a wave of attempted assassinations on U.S. soil allegedly planned by the Iranian government, which have led to a growing chorus of experts, activists, and lawmakers calling on President Biden to abandon talks with Iran to revive the 2015 nuclear deal.

Since Friday, people have been gathering at the U.S. Capitol grounds in Washington, D.C. for a photo exhibition to expose human rights violations inside Iran. Some experts, event organizers, and former officials who attended spoke to Just the News and urged the Biden administration to deny Raisi an entry visa for his role in these violations — most notably the executions of thousands of political prisoners in 1988.

While foreign leaders come to the U.N. every year, “Raisi is different,” said Ambassador Lincoln Bloomfield, Jr., former assistant secretary of state for political military affairs. “What he did in 1988 directly connects him to sending thousands of innocent people to their deaths in a crime against humanity that has been judged one of the worst since World War II.

“So, there comes a point where you need to say, ‘When does the line get crossed?’ I think everyone agrees that the line has been clearly crossed with Ebrahim Raisi.”

Raisi served as deputy prosecutor of Tehran, the Iranian capital, from 1985 to 1988, when he played a prominent role in the execution of tens of thousands of political prisoners, many of whom were members of the exiled People’s Mojahedin Organization of Iran (MEK), an Iranian opposition group.

In the summer of 1988, then-Iranian Supreme Leader Ayatollah Ruhollah Khomeini ordered the secret executions, and Raisi was part of a so-called “death committee” that carried out and oversaw several of the killings.

“What is so troubling to me is that the architects of this state-sponsored violence — violence that some scholars believe ranks amongst the worst crimes against humanity since the end of World War II — have never been brought to justice,” said Ivan Sascha Sheehan, executive director of the School of Public and International Affairs at the University of Baltimore.

The exhibition, which began Friday and ends Monday, was organized by the Organization of Iranian American Communities (OIAC). Photos of victims of the 1988 killings were displayed across the grounds by the U.S. Capitol building, where witnesses, relatives of victims, lawmakers, and political personalities spoke.

Victims of the 1988 killings of political prisoners in Iran are displayed across the U.S. Capitol grounds in Washington, D.C. on August 12, 2022.

Copyright given to Just the News

“As evidenced by this exhibit, Raisi is a mass murderer and must be prosecuted for crimes against humanity and genocide,” said Majid Sadeghpour, political director of OIAC. “Raisi’s persistent and direct role in multiple massacres in 1988 and 2019 is considered as ‘crimes against humanity’ and ‘genocide’ by Amnesty International and international legal experts. He must be held accountable for his crimes and face justice.”

In December 2019, the U.S. government confirmed that the Iranian regime killed about 1,500 anti-government protesters as part of a crackdown by security forces on demonstrations the prior month. The Treasury Department sanctioned Raisi for “advancing” the Iranian regime’s “domestic and foreign oppression.”

For its event, the OIAC started the social media hashtag #NoVisa4Raisi, which has been used by members of Congress such as Sen. Marco Rubio (R-Fla.).

Rep. Randy Weber (R-Texas) and other lawmakers — both Republicans and Democrats — have similarly called for the Biden administration not to give Raisi a visa.

Rep. Sheila Jackson Lee (D-Texas) addressed those at the exhibit and called on the U.S. to “ban” Raisi from coming “upon the soil” of the U.S. She also declared her support for a plan by Maryam Rajavi, ‌president-elect of the National Council of Resistance of Iran (NCRI), a coalition of Iranian opposition groups, to overthrow the current Iranian regime and replace it with a democratic government.

Last week, former Sen. Joe Lieberman, the Democrats’ vice presidential nominee in 2000, coauthored an op-ed in the Wall Street Journal urging Biden to “take strong action” against Raisi and deny him entry to the U.S.

“We call on President Biden to honor the 30,000 men and women who rejected [Iran’s] criminal regime and stand with the people of Iran and their call for accountability, justice, and a free, democratic, and non-nuclear republic of Iran,” said Sadeghpour.

A member of the opposition operating inside Iran recently told Just the News that the Iranian people have “lost all hope” in the Biden administration but will nonetheless overthrow the Islamist regime in control of their country with or without Western support.

The charges came as a man was indicted in a separate case on charges he was armed with a loaded AK-47 and tried to enter the Brooklyn home of journalist Masih Alinejad, a U.S. citizen and an outspoken Iranian dissident. Last July, the Justice Department announced charges against Iranian intelligence agents for plotting to kidnap Alinejad and forcibly return her to Iran.

Iran has denied involvement in attempts to harm or kill either Bolton or Alinejad. However, most observers aren’t believing Tehran, saying these charges are the latest indicator the U.S. needs to take firmer action against Iran’s leadership.

“How many Americans need to be targeted before Democrats and Republicans in the executive and legislative branches of the U.S. government can resolve themselves to a fundamental truth: Regime change in Iran is the only way forward?” asked Sheehan.

Meanwhile, author Salman Rushdie, whom the Iranian government had for years sought to kill over writings it deemed blasphemous, was stabbed multiple times before a speech in Chautauqua, N.Y. on Friday. Rushdie, 75, is alive and reportedly on the mend but still in critical condition.

Observers have been speculating the Iranian regime may have been involved in the attempted murder, although such a link has not been established. Following the attack, Iranian state media castigated Rushdie as an “apostate” responsible for “blasphemous” writings.

Amid this wave of plots and attacks, critics have called on Biden to abandon ongoing efforts to revive the nuclear deal, which places temporary curbs on Iran’s nuclear program in exchange for large-scale sanctions relief. Former President Trump withdrew the U.S. from the accord in 2018, and Biden has made it a top priority to revive the agreement.

“As the [Biden] administration pushes for a bad deal with Iran, the Justice Department charges a member of the IRGC for an assassination plot against former NSA John Bolton,” said Texas Rep. Michael McCaul, the top Republican on the House Foreign Affairs Committee. “This comes after the latest threat against Masih Alinejad. “The administration should walk away from the nuclear talks and prioritize Americans.”

“Iran’s nuclear weapons and terrorist activities are two sides of the same coin,” said the former U.S. ambassador to the U.N.. “No responsible U.S. government should think otherwise. America reentering the failed 2015 nuclear deal would be an unparalleled self-inflicted wound to ourselves and our closest Middle East allies. I remain committed to making sure it does not happen.”

Sen. Tom Cotton (R-Ark.) noted Iran’s leaders have been calling for the murder of Rushdie for decades. “We know they’re trying to assassinate American officials today,” he added. “Biden needs to immediately end negotiations with this terrorist regime.”

The White House maintains that diplomacy with Iran is the best way to address the regime’s malign behavior.

Biden continues to believe “diplomacy is the best path” to ensuring “Iran never acquires a nuclear weapon,” a White House spokesperson said in a statement. “At the same time, the Biden administration has not and will not waiver [sic] in protecting and defending all Americans against threats of violence and terrorism.”

According to Iranian opposition figures, however, the regime’s aggression is continuing unabated, serving as the latest sign a tougher U.S. posture is needed, including banning Raisi from coming to the U.N.

“The Iranian regime’s mad dash toward [a nuclear weapon] has continued, and the mullahs continue to wreak havoc across the Middle East,” said Soona Samsami, a U.S. representative for the NCRI. “Under the circumstances, the call is on the United States and the United Nations to prevent a serial killer to use the pulpit of the General Assembly to spew hatred and inflammatory rhetoric. Instead, Raisi should be arrested and prosecuted for countless crimes against humanity, genocide, and terrorism.”