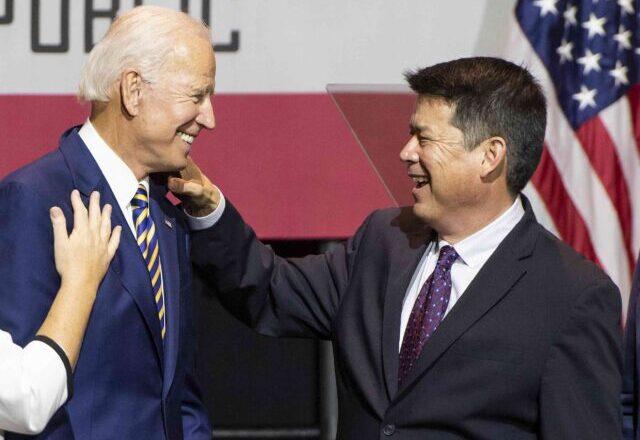 Former Rep. T.J. Cox (D-CA), who was part of the 2018 “blue wave” election that brought Democrats and Speaker Nancy Pelosi (D-CA) back to power, was indicted Tuesday on 28 federal counts, including fraud and campaign contribution fraud.

Among the charges is one that Cox fraudulently claimed to have purchased a property as his primary residence. Cox faced allegations during the 2018 campaign that his real “principal residence” was in Maryland and that he did not actually live in California. It is unclear whether the indictment concerns Cox’s attempt to prove that he lived in California in that race.

All of the counts related to conduct by Cox prior to, and during, the 2018 election, in which Cox narrowly defeated incumbent Rep. David Valadao (R-CA). Valadao had appeared to be winning on Election Night, and was even called the winner by the AP, but ended up losing when mail-in ballots were counted, including those that were collected via legal “ballot harvesting.”

Experts believe that ballot harvesting, used for the first time in the 2018 race, may have flipped the race from Valadao to Cox.

Later, Cox also faced claims that he had failed to disclose some of his businesses to the U.S. House of Representatives.

A press release from the Department of Justice said:

Terrance John “TJ” Cox, 59, of Fresno, is charged with 15 counts of wire fraud, 11 counts of money laundering, one count of financial institution fraud, and one count of campaign contribution fraud.

According to allegations in the indictment, Cox perpetrated multiple fraud schemes targeting companies he was affiliated with and their clients and vendors. Cox created unauthorized off-the-books bank accounts and diverted client and company money into those accounts through false representations, pretenses and promises. From 2013 to 2018, across two different fraud schemes, Cox illicitly obtained over $1.7 million in diverted client payments and company loans and investments he solicited and then stole.

In addition, Cox allegedly received mortgage loan funds from a lender for a property purchase by submitting multiple false representations to the lender, including fabricated bank statements and false statements that Cox intended to live in the property as his primary residence. However, the indictment alleges Cox intended to and did buy the property to rent it to someone else.

According to allegations in the indictment, Cox also fraudulently obtained a $1.5 million construction loan to develop the recreation area in Fresno known as Granite Park. Cox and his business partner’s nonprofit could not qualify for the construction loan without a financially viable party guaranteeing the loan. Cox falsely represented that one of his affiliated companies would guarantee the loan, and submitted a fabricated board resolution which falsely stated that at a meeting on a given date all company owners agreed to guarantee the Granite Park loan. No meeting took place, and the other owners did not agree to back the loan. The loan later went into default causing a loss of more than $1.28 million.

Valadao won his seat back from Cox in the 2020 election.

Joel B. Pollak is Senior Editor-at-Large at Breitbart News and the host of Breitbart News Sunday on Sirius XM Patriot on Sunday evenings from 7 p.m. to 10 p.m. ET (4 p.m. to 7 p.m. PT). He is the author of the recent e-book, Neither Free nor Fair: The 2020 U.S. Presidential Election. His recent book, RED NOVEMBER, tells the story of the 2020 Democratic presidential primary from a conservative perspective. He is a winner of the 2018 Robert Novak Journalism Alumni Fellowship. Follow him on Twitter at @joelpollak.