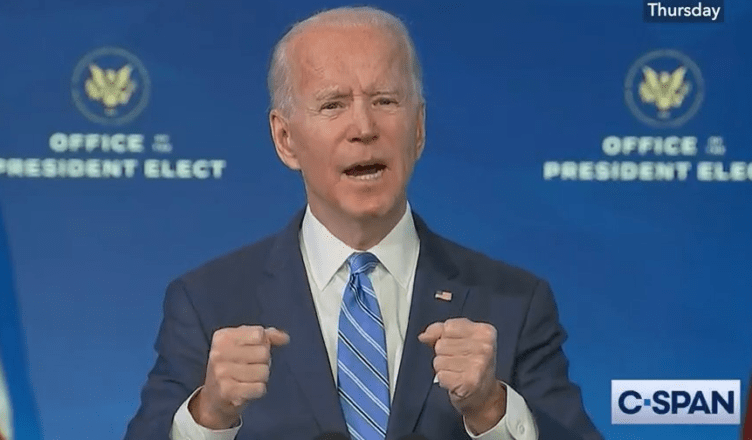 Joe Biden is announcing a new multi-part plan to ensure that as many unborn babies are killed in abortions as possible and up to birth in some states.

The supposedly “devout Catholic” has been putting together his abortion playbook for months. Instead of providing any actual help for women or support for abortion alternatives, Biden is aggressively promoting abortion at every turn and will focus on making it harder for states to protect babies from abortions.

The first part of Biden’s plan includes misusing a federal law to try to force states to do abortions — claiming they are necessary in emergency medical circumstances but also attempting to force states to allow aboritons as a method of birth control.

EMTALA requires hospitals that accept Medicare funds to provide medical treatment to people that arrive with an emergency medical condition. That includes providing a woman an abortion if her life is in danger.

Biden has already launched this legal campaign in Texas and Idaho with the hopes of forcing the states to allow abortions by requiring hospitals and doctors to perform abortions as a condition of receiving Medicare and Medicaid funding.

In Texas, state Attorney General Paxton has filed a motion asking a federal court to block Biden. He said Biden’s recent pro-abortion mandate “has the effect of requiring doctors and hospitals to choose between performing abortions in violation of State law or caring for women as they always have while incurring fines and the loss of federal funding” and added that Biden is misusing a federal law designed to protect unborn children to try to force abortions.

Paxton says Texas law has long permitted doctors to perform abortions when the life of the mother is at risk. That is still the law. EMTALA does not empower the federal government to change that. EMTALA requires hospitals to treat patients the same regardless of their ability to pay; it does not authorize the federal government to commandeer the practice of medicine.

The second part of Biden’s plan involves using the FDA to block states from banning or limiting abortion drugs. In many of the states that have banned abortions, pro-life laws also limit sales of the dangerous abortion pill that kills and injures women as well as kills babies. In other states, surgical abortions are banned and follow-up laws are necessary to protect women and children from the abortion pill.

Mini Timmaraju, president, NARAL Pro-Choice America, who also is working with the White House on the issue, said the litigation strategy is key.

Biden’s actions will likely square off with the Dobbs decision as the Supreme Court has clearly given states the latitude to pass laws protecting babies from abortions.

A third part of Biden’s plan includes promoting ballot measures that create a so-called right to abortions up to birth as the White House will urge public support for such proposals.

The White House is also crafting plans to replicate the success in Kansas for upcoming races, said the sources. It is closely tracking ballot initiatives in California, Kentucky, Michigan, and Vermont and gubernatorial races like Michigan’s, where abortion has become a central issue, sources said.

Kentucky is one that is witnessing a surge of interest along with California, NARAL’S Timmaraju said.

The Biden administration will also compile data on how the lack of abortions supposedly hurt women — as if the blessing of a new baby is supposedly a bad thing. Abortion bans don’t force anyone to get pregnant and, instead of promoting contraception, abstinence, birth control or other alternatives, Biden ignores pregnancy prevention and assumes the only choices are abortion or being forced to have a baby.

The White House is compiling research on the physical and mental harms women face if they’re denied access to abortion, as well as the economic impact that forced pregnancies can have on men, women, and families; and plans to communicate that to voters and come up with a consistent messaging plan, sources said.

It will also target men in its messaging, asking them to consider how their sisters, nieces, cousins could be affected if abortions were unavailable, and the costs related to supporting an unplanned pregnancy, in an effort to broaden understanding, the sources said.

The messaging also ignores abortion risks such as its link to breast cancer and premature birth, it ignores how men often pressure or coerce women into having abortions and ignores how abortions kill babies and how the loss of millions of people adversely affects society.

Finally, the Biden administration plans to push abortion on Christians, with a false message that they can be true to their faith and support killing unborn children.

As LifeNews reported, the Supreme Court overturned Roe v. Wade, with a 6-3 majority ruling in the Dobbs case that “The Constitution does not confer a right to abortion” — allowing states to ban abortions and protect unborn babies. The high court also ruled 6-3 uphold the Mississippi 15-week abortion ban so states can further limit abortions and to get rid of the false viability standard.

Chief Justice John Roberts technically voted for the judgment but, in his concurring opinion, disagreed with the reasoning and said he wanted to keep abortions legal but with a new standard.

Michigan, Wisconsin and West Virginia have old pro-life laws on the books but there is question about whether they are applicable and will be enforced.

Ultimately, as many as 26 states could immediately or quickly ban abortions and protect babies from certain death for the first time in nearly 50 years.

“Abortion presents a profound moral question. The Constitution does not prohibit the citizens of each State from regulating or prohibiting abortion. Roe and Casey arrogated that authority. We now overrule those decisions and return that authority to the people and their elected representatives,” Alito wrote.

“Roe was egregiously wrong from the start. Its reasoning was exceptionally weak, and the decision has had damaging consequences,” Alito wrote. “And far from bringing about a national settlement of the abortion issue, Roe and Casey have enflamed debate and deepened division.”

Polls show Americans are pro-life on abortion and a new national poll shows 75% of Americans essentially agree with the Supreme Court overturning Roe.

Despite false reports that abortion bans would prevent doctors from treating pregnant women for miscarriages or ectopic pregnancies, pro-life doctors confirm that is not the case. Some 35 states have laws making it clear that miscarriage is not abortion and every state with an abortion ban allows treatment for both.