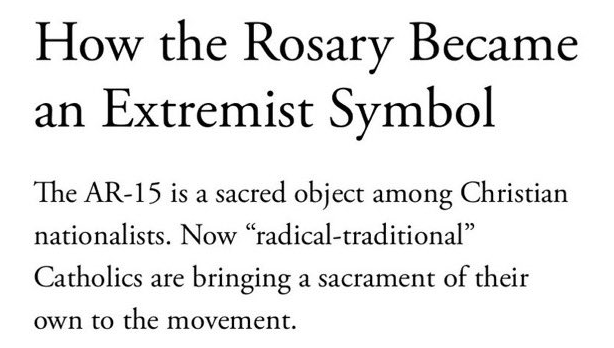 That’s right. Delusional Americans (probably white people) are buying into Christian nationalism without knowing it. So how does Blake know they don’t know it? He must be very smart. After all, he works for CNN.

Traditional Catholics—be they “rad trads” or “trad Caths”—are mostly good Catholics who enjoy the solemnity of the Latin Mass. There may be some crackpots among them, but it’s a sure bet that they are far fewer in number than those who write for The Atlantic, the Daily Beast or CNN.

LifeNews Note: Bill Donohue is the president of the Catholic League for Religious and Civil Rights.

We live in a time when crackpots on the left and the right are surging, conjuring up conspiratorial theories about everything from the January 6 riot to the design of “racist” highways. The nice thing about devil’s theories is that they appear to provide conclusive answers to complex problems. The drawback is that they’re the work of madmen.

We now have a writer for The Atlantic telling us that “the rosary has acquired a militaristic meaning for radical-traditional (or ‘rad trad’) Catholics.” For the “rad trads,” the rosary “can be a weapon in the fight against evil.”

Who are these “rad trads”? The author, Daniel Panneton, never really says. Not one person or organization is mentioned. So where does he get his information? Social media. “Their (‘rad trads’) social media pages are saturated with images of rosaries draped over firearms, warriors in prayer, Deus Vult (‘God wills it’) crusader memes, and exhortations for men to rise up and become Church Militants.”

Ironically, the one person he names as inspiring this crusade is Pope Francis. Then why is the pope wary of those who like the Latin Mass? Never mind, Panneton has uncovered a remark that exposes the pope as a threat to peace. “There is no path to holiness…  without spiritual combat” (his ellipsis). That settles it—the pope is a warmonger.

Alex Thomas, who writes for the Daily Beast, prefers to call the “rad trads” the “trad-Caths.” Who are they? He says “they love the Latin Mass,” a clear indication that they are a threat to humanity. “There is no doubt that the trad-Cath movement is metastasizing and often dovetailing with Christian nationalism through the shared notion that ‘Western civilization’ is at risk.”

Notice that Thomas doesn’t believe there really is such a thing as Western civilization. He thinks it is a fiction entertained by the likes of “trad-Caths.”