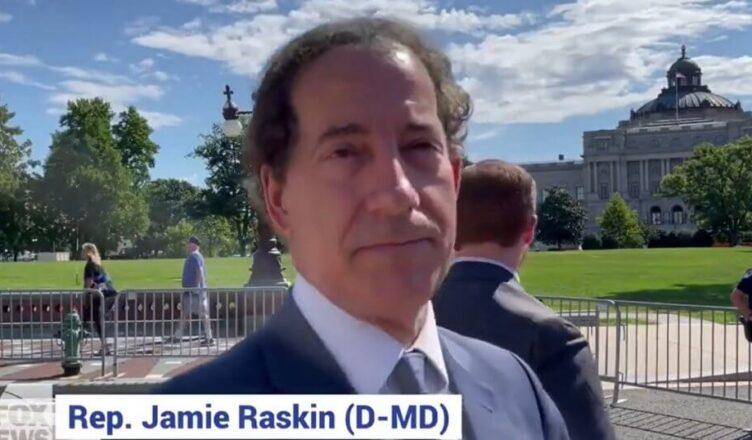 Congressman Jamie Raskin (D-MD) was discussing the recently passed Inflation Reduction Act with reporters when one asked him what specific measures the act will take in the process of reducing inflation, leading Raskin to give a telling response.

Raskin touted the passage of the act, claiming that the sooner its provisions could be implemented the sooner Americans would start seeing some relief.

That was when a reporter asked him to point to a specific provision that would act to lower inflation.

“What parts of the bill do you think will put to work on [lowering inflation] specifically?” the reporter asked.

Raskin stammered for a moment before simply saying, “Next question.”

The Inflation Reduction Act passed the House and Senate last week, and had been pushed as a climate, health, and tax bill. Among the bill’s many measures, it will massively expand the size of the Internal Revenue Service by about 87,000 new agents.

White House Press Secretary Karine Jean-Pierre similarly struggled with a question on the bill’s effectiveness at combating inflation while speaking to Jonathan Karl on ABC’s “This Week” over the weekend.

After she claimed that the bill would lower costs for Americans, Karl pushed back: “But let me ask you, it’s called the ‘Inflation Reduction Act,’ but the Congressional Budget Office, which is nonpartisan, said that there would be a negligible impact on inflation this year and barely impact inflation at all next year. Isn’t it almost Orwellian? How can you call it inflation reduction when the nonpartisan experts say it’s not gonna bring inflation down?”

“Look, here’s the thing. We have 126 economists, both Republicans, both Democrats who have said it’s going to fight inflation, five former secretaries of treasury,” Jean-Pierre claimed.

“So you disagree with the assessment of the CBO?” Karl pressed again.

“Well, there’s more to it than that,” she said. The Press Secretary argued that Republicans were just framing the issue in such a way that it looked like it wouldn’t work.

An analysis compiled by a group of economists and data analysts at the University of Pennsylvania showed that the impact of the Inflation Reduction Act will likely be “statistically indistinguishable from zero,” according to the Penn Wharton Budget Model.