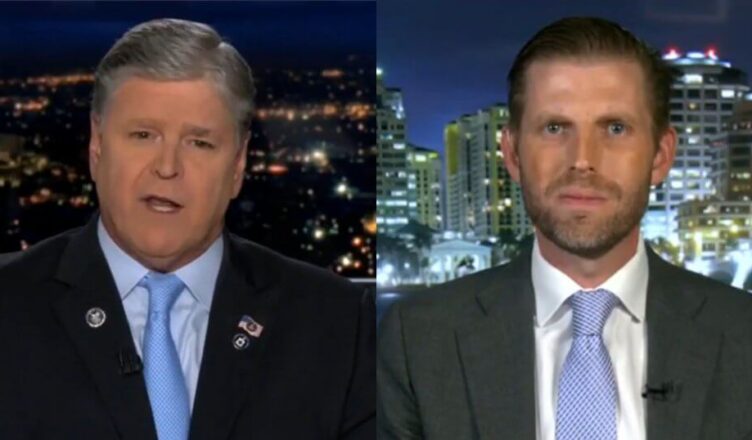 On Monday, Eric Trump, son of former President Donald Trump, warned that America is furious with the FBI and Biden’s Justice Department, saying, “I’ve been through all these firestorms over the years. I’ve never seen America more mad than it is right now.”

Eric Trump’s comments were in reference to the recent FBI raid on Donald Trump’s home in Mar-a-Lago, Florida, and shared during an interview with Fox News’ host Sean Hannity.

According to the Western Journal, Eric Trump noted that agents refused to allow surveillance tapes to record the search, agents rummaged through Melania Trump’s clothing and attorneys were not allowed to observe the search. Eric asserts the unprecedented and unnecessary FBI raid was a form of persecution that invaded the privacy of the Trump family.

The Western Journal captured the interchange between Eric Trump and Sean Hannity:

Hannity asked: “You still have the surveillance tape, is that correct? Are you allowed to share that with the country?”

Eric continued pointedly: “That’s why cops wear body cams. They don’t tell you to turn off cameras. They want transparency. And that’s not what happened here.”

Hannity pressed: “And you know for a fact they asked for the cameras to be turned off.”

Eric replied: “[Yes], they asked for the cameras to be turned off.”

Pointing to the backlash the Biden administration is receiving, Eric said, “[As a result of the raid] my father’s poll numbers have absolutely gone through the roof.”

Eric continued: “I mean, you wouldn’t believe the energy out there. I’ve been through all these firestorms over the years. I’ve never seen America more mad than it is right now.”

After a dramatic pause, Eric added that the Justice Department has been “weaponized” and that “people are not buying the sham in the country.”

In a separate Monday interview on Fox News, Donald Trump also shared his thoughts on the raid:

“The country is in a very dangerous position. There is tremendous anger like I’ve never seen before, over all of the scams, and this new one — years of scams and witch hunts, and now this.”

“There has never been a time like this where law enforcement has been used to break into the house of a former president of the United States, and there is tremendous anger in the country — at a level that has never been seen before, other than during very perilous times,” he said.

Trump concluded the interview with an ominous statement:

“The temperature has to be brought down in the country. If it isn’t, terrible things are going to happen.”