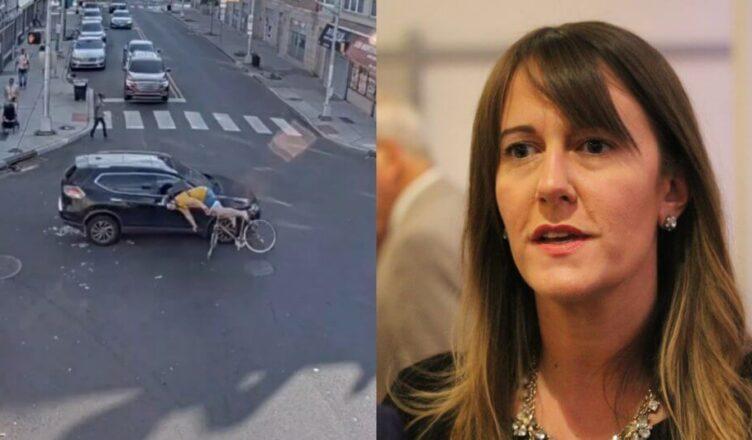 A Jersey City, N.J., councilwoman who allegedly collided with a cyclist and left the accident scene still refuses to resign.

Traffic camera video released by city officials Tuesday clearly shows the black SUV allegedly driven by DeGise striking a man on a bicycle in the intersection of Martin L. King Drive and Forrest Street July 19. The vehicle’s driver did not stop to see if the man hit by the vehicle needed medical attention.

“Councilwoman DeGise was elected overwhelmingly just a few months ago and she has no intention of walking away from the commitment she made to serve the people of Jersey City,” DeGise spokesman Phil Swibinski said soon after the accident.

During a city council meeting Wednesday night, DeGise addressed personal attacks and pushed back on her critics who are calling for her resignation. She said they should wait until the legal process unfolds before commenting further on the situation. About 100 people spoke at the meeting, which was open to the public. Most speakers called for DeGise to resign. Only a few expressed support.

“When the legal process in traffic court is finished, I will have more to say and I can address outstanding concerns and questions. And in the meantime, I’m not resigning,” she plainly said, following more than two hours of hearing from members of the community.

“For those who call for my resignation, you are heard and I understand that you have concerns and questions that I respect and would enjoy any type of dialogue or discussion with you after I go to court,” the Jersey City councilwoman added.

In her remarks Wednesday, the councilwoman pushed back on personal attacks and suggested she was also a victim in the situation.

“This has only made me stronger and I will use that strength to fight for the issues that help every resident,” DeGise added.

The councilwoman started her remarks by saying she felt horrible about the situation and wanted to continue to deal with the issue privately.

DeGise also addressed those who have supported her since the alleged incident.

“I’m appreciative of everyone who came out and had to stay tonight. I’m appreciative and so grateful for the people who have reached out to support me or just want to wait until that court process goes on to ask me any further questions [or] to pry anymore. I cannot make it through these days without you.”

“I remain committed to this position on the council, no matter your perception of me. Please know that my commitment is genuine, as is my love for Jersey City, and it is as strong as ever. Thank you.”

The city’s traffic camera video clearly shows Black running a red light, but it also shows the vehicle allegedly driven by DeGise did not stop after the accident.