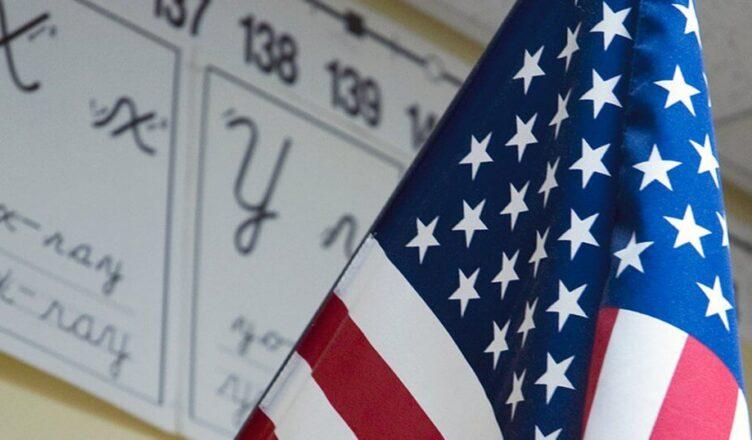 Texas public schools must now conspicuously display, above the U.S. and Texas flags, donated posters saying “In God we Trust.” Public colleges are also subject to the new state law.

Durable posters must center the U.S. flag beneath the national motto, along with a representation of the Lone Star State’s flag. The posters may not depict any other words, images or information under the new state statute.

In addition to the requirements about wording and flag displays, the new law stipulates posters must either be donated or purchased with private funds and made available for display by the school.

“We just felt like it was a great opportunity to display our national motto in our public schools,” said state Rep. Tom Oliverson. “This was a idea that I had after seeing something similar happen in a couple of different states.”

The Christian conservative wireless network provider Patriot Mobile has donated a number of signs bearing the motto “In God We Trust,” according to a Chron report. Compliant signs donated by the provider have already started appearing in Carroll Independent School District schools.

Carroll ISD is a 21-square mile district in the Dallas-Fort Worth area with 11 schools and 1,100 employees serving more than 8,400 students.

During the presentation, the Board receives a signage donation pursuant to SB 797 by Patriot Mobile LLC. pic.twitter.com/Gju3NP0xpR

The Yellow Rose of Texas Republican Women posted photos on Facebook this week displaying framed signs volunteers made and donated to a number of Cy-Fair and Tomball ISD schools, the Chron report added.

“We were excited that a few of the sponsors were able to come along and present their poster to the school’s principal,” the group said on Facebook. “The Communications Director joined us at a couple of schools to take pictures for a story they will be doing on the program.”

State Sen. Bryan Hughes (R-Mineola) a coauthor of the bill, promoted the signs on Twitter Tuesday.

“The national motto, ‘In God We Trust,’ asserts our collective trust in a sovereign God,” Hughes remarked.

“I’m encouraged to see groups like the Northwest Republican Women and many individuals coming forward to donate these framed prints to remind future generations of the national motto,”p Hughes added in a later thread, referring to the Yellow Rose of Texas Republican Women.

Of course, not everyone is pleased with the display of our nation’s motto, which was enacted by former President Dwight Eisenhower in 1956.

Cy-Fair parent Aly Fitzpatrick said the signs were a “disgrace” and an attempt by Republican groups to hijack public education, according to the KHOU report. “The point is we are America and not everyone does believe in the same God,” Fitzpatrick said. “And telling children that is very confusing.”

It is unclear if Ms. Fitzpatrick is aware President Eisenhower practiced the Jewish faith.