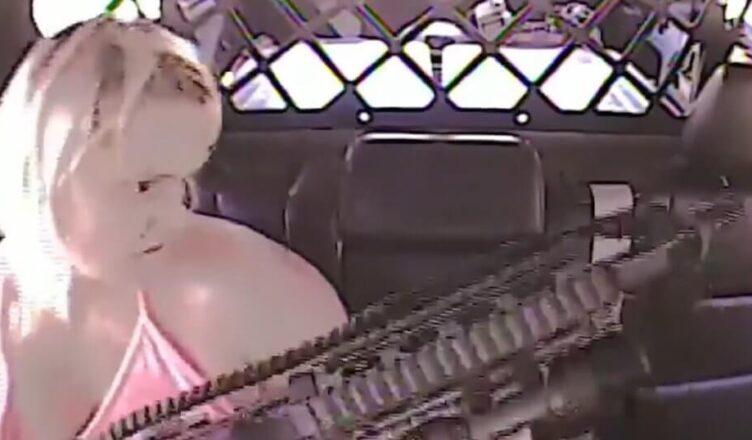 A shocking security video showed an Oklahoma woman in the backseat of a police cruiser slip out of her handcuffs, grab an officer’s AR-15, and shoot at him and a bystander through a car window.

The Grady County Sheriff’s Office in Oklahoma said police responded to an emergency call on August 12 at about 11:45 a.m. about a strange woman crawling around on the ground and barking at people.

They placed 36-year-old Rachel Zion Clay into a deputy’s patrol car where she was able to slip out of the handcuffs and reach the officer’s AR-15 that was in a console labeled “gun.”

Video from the officer’s body cam showed the confusion as shots rang out and hit a bystander in the chest. They can be seen trying to ascertain where the shots were coming from and then hide behind another cruiser.

“She was able to figure out how to put a round in it, put it on fire, and she fired approximately 10 rounds at our deputies and a civilian,” said Grady County Undersheriff Gary Boggess.

Clay then barricaded herself in the car, and police negotiated with her for three and a half hours before finally deploying an armored breaching vehicle to help apprehend her.

Both the officer and the bystander were hospitalized and treated for the injuries they suffered in the incident. The deputy was released from the hospital with non life-threatening injuries, while the condition of the bystander was unknown.