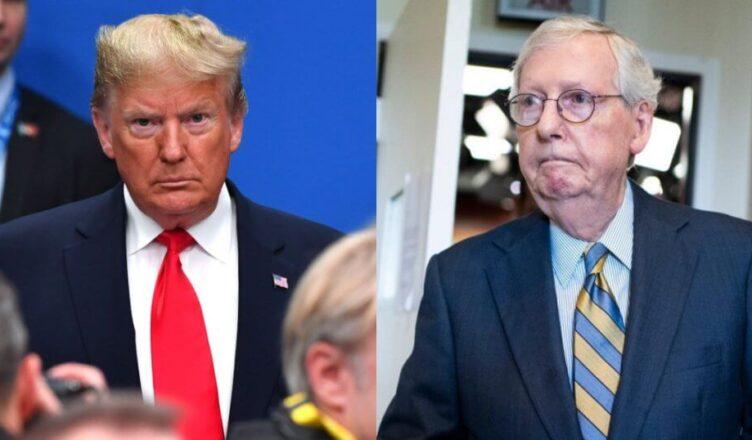 The Senate minority leader and a former president’s war of words was renewed by recent remarks about Republican Senate candidates.

Sen. Mitch McConnell (R-KY) spoke last Thursday during a Northern Kentucky Chamber of Commerce luncheon. He told the assembled businessmen Republicans stand a better chance of flipping the House of Representatives in November. McConnell hopes his party edges out the Democrats but thinks candidate quality may hurt their chances.

“Senate races are just different, they’re statewide,” McConnell stated. “Candidate quality has a lot to do with the outcome.”

Prominent Republicans and conservatives were quick to lower the boom on him after hearing his remarks.

“Why do Republicans Senators allow a broken down hack politician, Mitch McConnell, to openly disparage hard working Republican candidates for the United States Senate?” asked former president Donald Trump. “This is such an affront to honor and to leadership.”

“He should spend more time (and money!) helping them get elected, and less time helping his crazy wife and family get rich on China!”

“Democrats are painting Republican Senate candidates in upcoming elections and midterms as cruel and out of touch,” Hannity said Friday. “Well, apparently Senate Minority Leader Mitch McConnell is content to leave them out-to-dry and fend for themselves.”

The Fox host then played a clip of McConnell’s remarks during his broadcast.

“How about you get out there, Mitch, and fight for your team?” continued Hannity. “What’s your agenda, Mitch, or would you rather just sit by and watch helplessly as Democrats lie to your face, pass another $500 billion green energy boondoggle?”

“His term as a leader needs to come to an end.”

The Federalist’s senior editor Mollie Hemingway also blasted McConnell for those remarks, which she attributes to a feud with the former president.

Republican unease with any hint of dissension is not helped by trailing poll numbers for Senate candidates Blake Masters of Arizona, Herschel Walker of Georgia and Mehmet Oz of Pennsylvania. They, along with incumbent Sen. Ron Johnson (R-WI), trail opponents in their respective races.