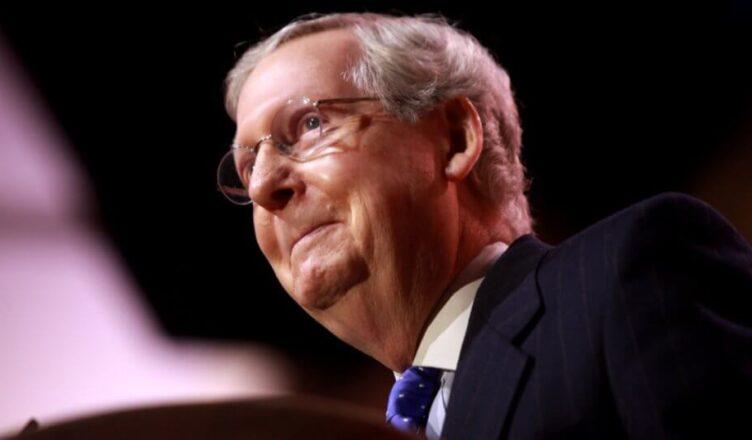 The opinions expressed by columnists are their own and do not necessarily represent the views of Resist the Mainstream.

On Thursday, Senate Minority Leader Mitch McConnell (R-KY) publicly complained about the “quality” of GOP Senate candidates. He declared that a Republican U.S. Senate majority was not likely.

At a Northern Kentucky Chamber of Commerce luncheon, McConnell claimed that “I think there’s probably a greater likelihood the House flips than the Senate.” Why does he believe the GOP will not gain one seat in a year in which Biden has destroyed everything from border security to the economy? He stated that “Senate races are just different, they’re statewide. Candidate quality has a lot to do with the outcome.”

What did he mean by “candidate quality?” He implied that many of the Republican Senate nominees are too conservative, too affiliated with President Donald Trump and too likely to support “Make America Great Again” (MAGA) policies.

McConnell prefers establishment Republicans, the moderate “country club” candidates who cherish the Deep State, bureaucracy, growing government and raising taxes. They just want to do it slightly less than their Democratic colleagues.

These Republicans are globalists and open border supporters who are unconcerned that millions of illegal aliens have entered the United States during Biden’s term. These McConnell Republicans also do not oppose government COVID-19 mandates or attacks against our children in the classroom with curriculum that is sexualized and infested with anti-American poison.

It is no surprise that McConnell supports moderate Republican candidates. He despised the Tea Party movement and truly hates everything associated with MAGA and Donald Trump.

McConnell is the type of Republican who is comfortable with U.S. Senators Mitt Romney (R-UT) and Lisa Murkowski (R-AK), Congresswoman Liz Cheney (R-WY) and the members of the Bush family. He is the epitome of the party’s problem.

If he eventually becomes U.S. Senate Majority Leader, he will do nothing of substance to reform our government or accomplish the conservative goals promoted by the grassroots members of the party. In fact, he would prefer to be Senate Minority Leader with a smaller GOP delegation and no MAGA Senators.

Republicans will never succeed in remaking our government and fixing our problems with people like McConnell in U.S. Senate leadership positions.

Not surprisingly, President Trump has railed against McConnell, thoroughly understanding the threat he represents to the MAGA movement. McConnell does not care, for he has raised a massive amount of money for his Senate Leadership Fund (SLF).

This group has already placed major ad buys in several states, such as Pennsylvania and Ohio. For the fall elections, the SLF has reserved $141 million in advertising in states such as Alaska, Arizona, Georgia, and Nevada.

If Republicans win control of Congress in the midterm elections, GOP voters are expecting courageous leadership in Washington D.C. to stop the implementation of dangerous Biden policies. For this ambitious agenda to succeed, the GOP must have a strong Republican leader in the United States Senate.

Sadly, McConnell prefers timid, incremental policies that will not address the chaos in the country today. Even worse, one of his frequent habits is to support the policies of the Biden administration whenever possible. For example, McConnell voted for Biden’s wasteful $1.2 trillion infrastructure bill and the unnecessary gun control legislation.

McConnell also strongly supports Biden’s position regarding the war in Ukraine and North Atlantic Treaty Organization (NATO) expansion. He has fervently backed sending billions of dollars in aid to the Ukrainian government. McConnell recently said that “we all agree the most important thing going on in the world right now is the war in Ukraine.”

No, Senator, we do not “all agree” with your focus on the war in Ukraine. In fact, one recent poll discovered that 46% of Republicans believed the nation was sending too much support to Ukraine.

It is not that grassroots Republicans are unsympathetic to the plight of the Ukrainian people, but they want our leaders to focus on the plethora of unresolved problems in our country.

McConnell’s interventionist views are directly counter to President Trump’s focus on our country and our problems. Trump and the MAGA movement represent the millions of Americans who are tired of the United States acting as the policeman of the world.

While McConnell and his establishment Senate cronies of both parties want to fund a war halfway around the world, they have little interest in the southern invasion that is overwhelming our border patrol.

While politicians of both parties obsess about a war in Europe, our country is wide open to an unrelenting influx of potent and illegal drugs, such as fentanyl, that are killing Americans in record numbers. Fighting the fentanyl epidemic should be at the forefront of every politician’s agenda. Unfortunately, most like McConnell, have their energies directed elsewhere.

While McConnell worries about fighting the MAGA agenda and sending billions of dollars overseas, 2,250 people in Kentucky died of drug overdoses last year. This represented a 15% increase from the previous year.

Tragically, Americans are dying in Kentucky and every other state due to Biden’s open border policies. This should be a major rallying cry for Republicans in the midterms.

Along with the border and the drug epidemic, Republicans should be focused on our poor economy, rampant crime, and our constitutional rights, which are being continually attacked during the Biden presidency.

Instead of railing about the candidate “quality” of conservative Republicans, McConnell should be concerned about the diminishing “quality” of American lives and how to defeat the party that is hell bent on ruining the country.

Jeff Crouere is a native New Orleanian and his award-winning program, “Ringside Politics,” airs Saturdays from Noon until 1 p.m. CT nationally on Real America’s Voice TV Network & AmericasVoice.News and weekdays from 7-11 a.m. CT on WGSO 990-AM & Wgso.com. He is a political columnist, the author of America’s Last Chance and provides regular commentaries on the Jeff Crouere YouTube channel and on Crouere.net. For more information, email him at jcrouere@gmail.com