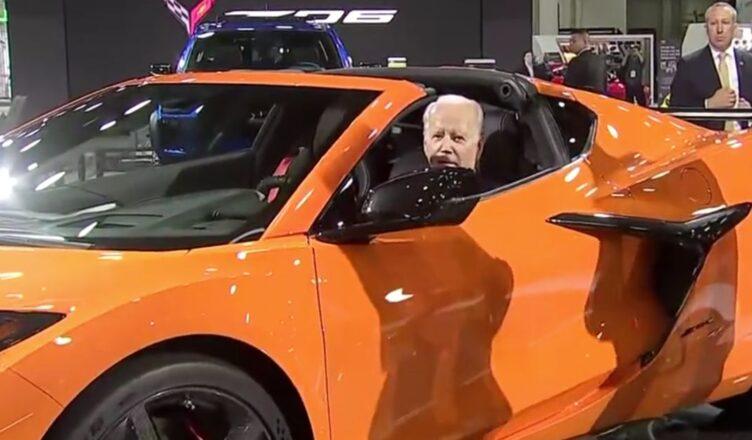 President Joe Biden visited the Detroit Auto Show on Wednesday, and his appearance was full of his ever-present gaffes.

As he climbed into the front seat, Biden looked as out of touch as he has ever been. He tried to save face by making a joke.

As uncomfortable as that clip is, it was Biden’s exit from the vehicle that truly raised eyebrows.

Biden bent down at the waist as if he was about to stand up, but he quickly decided against it. A man then came over and appeared to shake Biden’s hand.

While still grasping the man’s hand, Biden gingerly stood up and got out of the vehicle. One Twitter user felt the apparent handshake was nothing more than a disguise.

“This dude disguised a handshake to help him up because he can’t stand up on his own,” the user wrote.

This dude disguised a handshake to help him up because he can’t stand up on his own 😂😂😂😂😂😂 pic.twitter.com/cUZkjdxmLO

Another user joked that he may try the same move in the future.

“That’s pretty slick” the user wrote. “Gotta remember that one.”

This dude disguised a handshake to help him up because he can’t stand up on his own 😂😂😂😂😂😂 pic.twitter.com/cUZkjdxmLO

It is possible that the man was truly just shaking Biden’s hand, but many Americans watched the video and interpreted it as the president needing assistance to stand up. The fact that this is now the perception of our president is incredibly concerning, but it is hardly surprising.

After all, this is the same man who fell over on his bike while he was completely stationary just three months ago.

Another angle of Biden fall from bike today pic.twitter.com/Rj766z8VPL

To make matters worse, the Corvette that Biden sat in has a gas-powered engine, according to Chevrolet’s website. This is a stark contrast to his recent rhetoric advocating for electric vehicles.

In September 2021, CNN reported Biden’s goal was to ensure half of the vehicles sold in the United States by 2030 would be electric.

General Motors, the parent company of Chevrolet, also announced its commitment to ensuring 100 percent of its cars sold would be zero-emissions by 2035.

The president’s trip to the Detroit Auto Show was embarrassing on multiple levels, but that is what Americans have come to expect.