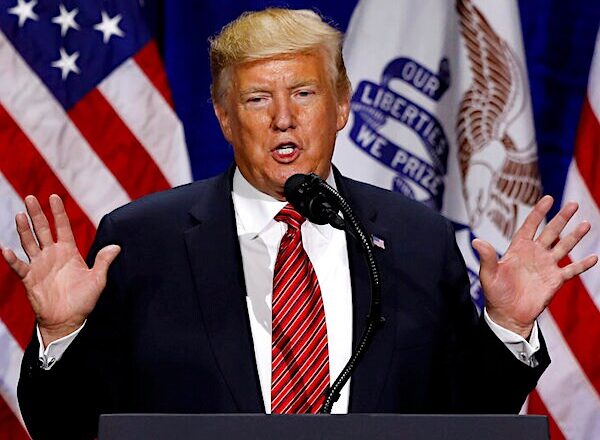 Firing back at The New York Times reporting former President Donald Trump will make an early 2024 campaign announcement as soon as July 4, Trump blasted the “fake news” without providing any clarity on his intentions.

“12 wins & zero losses this week (Mary Miller won against all odds), 33 & 0 in Texas, 132 & 7 this cycle — there has never been anything like ‘our’ endorsement — and the Fake News New York Times writes that I may announce an early presidential run because I haven’t done well with my endorsements,” Trump fired back at the Times on Saturday morning in a Truth Social post. “Actually, doing better than ever, breaking all records. We are dealing with very sick, bad people in the fake news media.

“….Also, beating everybody in the polls by really big, record type, numbers!” Trump added in an ensuing post.

“His campaign would also be constrained by a strict $2,900-per-person donation cap for the primaries, meaning he could tap his largest donors only once over the next period of roughly two years to directly fund a candidacy,” according to The Times.

Republican National Committee Chair Ronna McDaniel wants Trump to wait until after the midterms to announce, The Times reported. That has long been the expected timetable for Trump’s official declaration.

There has been some talk Trump might want to get out ahead of his potential competition by declaring before them. Also, there is increasing speculation his former secretary of State, Mike Pompeo, former Vice President Mike Pence and Florida GOP Gov. Ron DeSantis might be closing in on an announcement sooner rather than later to get the wheels turning against Trump.

DeSantis is highly unlikely to announce before his November gubernatorial election, and he is the only one polling consistently second to Trump.

NBC News had whispered July 4 as a Trump announcement day, but even former campaign adviser Jason Miller, who is urging Trump to run sooner than later, panned that as any kind of target date.

Trump has made multiple appearances on Newsmax of late, including this week with “Wake Up America” host Rob Finnerty, last weekend at a Save America rally in Illinois that aired live on Newsmax and last month with “Eric Bolling The Balance.”