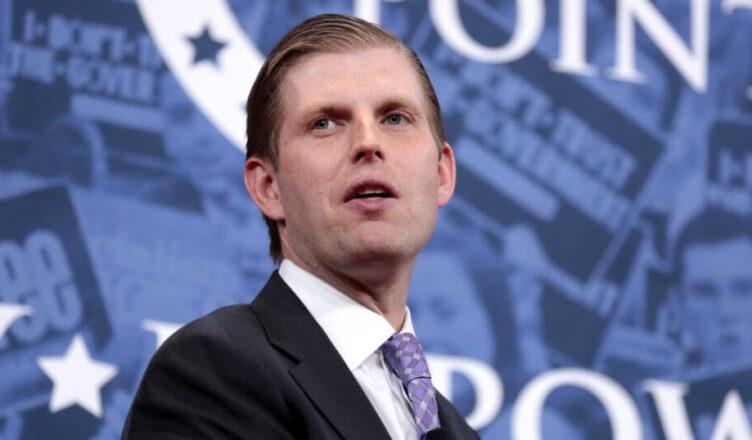 A son of former President Donald Trump described some of the contemptuous behavior the Justice Department displayed when raiding Mar-a-Lago.

Eric Trump explained dozens of armed federal agents arrogantly ordered everyone out of the building and demanded security cameras be turned off. The Trump son noted security cameras were not turned off but the FBI refused to let Trump attorney Christina Bobb observe them during their ten-hour search of the president’s home.

Indeed, they forced her and other Trump staff to stand in the driveway under Florida’s tropical heat that reached above 90 degrees Monday.

Eric Trump revealed FBI agents refused to hand over the search warrant for their raid on Mar-a-Lago and kicked an attorney off the property in a new, incisive account of the Monday operation at the Florida estate.

Speaking exclusively to DailyMail.com, the former president’s son said the 30 agents who arrived at the property asked staff to turn security cameras off – but they refused.

He also said that the attorney was forced to stand at the end of the Mar-a-Lago driveway while the team searched inside – and allegedly used safe crackers to break into his father’s safe.

He called the raid another ‘coordinated attack’ on his father Donald Trump and insisted there is no way President Joe Biden was kept in the dark about the search.

The latest explosive account comes with the Department of Justice facing mounting pressure to explain what grounds they had for the search.

Eric said that his father’s lawyer Christina Bobb was forced to stand at the end of the Mar-a-Lago driveway throughout the raid.

‘There’s 30 agents there,’ he recalled of the Monday search in a phone call with DailyMail.com. ‘They told our lawyer… you have to leave the property right now. Turn off all security cameras.’

He said that Bobb was confused why a lawyer for the person’s home being raided by the FBI was not able to see or obtain a copy of the search warrant.

Eric said he would be ‘thrilled’ to find out if there was a valid search warrant.

The FBI declined to comment to DailyMail.com on the raid and Eric’s claim no search warrant was handed over to Trump’s legal team.

Bobb also told Real America News on Tuesday that she was able to see the warrant, but claimed that it was partly sealed, making it impossible for her to see what the probable cause was that compelled a judge to approve the raid. She also did not suggest she had received a physical copy.

‘When I arrived and kind of announced myself as the legal representation for President Trump. I asked to see a copy of the warrant,’ the Trump lawyer detailed of the events the day prior.

‘Initially they refused and said, ‘You know, we don’t have to show it to you.’ And there was a little bit of an exchange about whether it was appropriate to withhold the warrant when you’re searching the residence of the former president, who’s likely to be the Republican nominee in the next election, though they conceded and let me see it, they did not give me a copy of it right away, but they did let me see it,’ added Bobb.